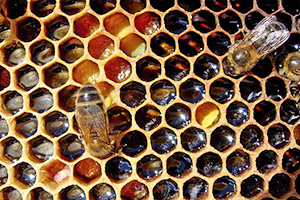 Neonicotinoid pesticides (or neonics) continue to gain notoriety as a driving factor in declining bee populations. But a mounting body of evidence also shows that neonics aren’t the only class of pesticides harming these critical pollinators.

A report released this week — by researchers from Penn State and the University of Florida — helps build a case that several pesticides commonly found in hives kill bee larvae.

Researchers tested four of the pesticides most commonly found in hives — chlorothalonil, chlorpyrifos, fluvalinate and coumaphos. These chemicals were fed to honeybee larvae on their own and in combination with each other, at concentrations that are currently found in hives.

The results? All four chemicals contributed to higher larvae mortality, and several combinations were more toxic than individual chemicals on their own.

Forager bees bring an average of six pesticides back to the hive in the pollen they collect.

In much of the research on pesticides and pollinators, adult honey bees are exposed to one pesticide at a time. But in real-world environments, bees are frequently exposed to multiple chemicals at once. Case in point: the authors of this latest study have previously shown that forager bees bring an average of six pesticides back to the hive in the pollen they collect. And when pesticides find their way into the hive, they affect larvae more severely than adult bees.

This week's report provides new evidence that exposure to multiple pesticides leads to synergistic effects — impacts that are greater than the sum of their parts. And when bee larvae are exposed to more than one pesticide at a time, the chemicals interact in unpredictable ways, often amplifying the harm caused by one pesticide on its own.

So what are these culprit chemicals? Two are crop pesticides. The first, chlorothalonil, is a fungicide, categorized by the EPA as a probable human carcinogen. Research is beginning to show that it may be just as harmful for bees as it is for people. According to USDA researchers, fungicides in pollen are correlated with higher rates of the gut parasite Nosema. In spite of this evidence, chlorothalonil is still categorized by EPA as "relatively non-toxic" for bees.

The other crop pesticide commonly found in hives is chlorpyrifos, an insecticide frequently used on fruits, vegetables and nuts. It’s also a known developmental toxicant, an endocrine disruptor and a chemical of particular concern for kids.

Fluvalinate and coumaphos are miticides, used by some beekeepers to control varroa mites. Beekeepers have been driven to rely more heavily on these miticides in recent years as bees’ immune systems are weakened by exposures to neonicotinoids.

Inert, but not benign

On top of synergies between multiple pesticides, there may be another quiet culprit in bee declines: so-called “inert” ingredients. This week’s study found that NMP — a common additive in many pesticide formulations — increases mortality for bee larvae, even at very low doses.

Pesticide companies are only required to release information on the active ingredients in their products, leaving the public in the dark about the other chemicals in the mix. Without much knowledge about what these chemicals are, it’s tricky for researchers to learn more about their effects.

This week's study is further evidence that inerts are anything but innocuous. The authors were quick to point out that little is known about the ecosystem-wide impacts of billions of pounds of “inactive” ingredients, which make up the majority of most pesticide formulations.

Science clearly shows that neonicotinoids — the most commonly used insecticides around the world — are harmful to bees. And research continues to clarify the the bigger picture about pollinators and pesticides: many chemicals — active or "inactive," on their own and in combination — weaken bees' immune systems and make them more vulnerable to common stressors. And in the U.S., the Environmental Protection Agency (EPA) is charged with protecting human and honey bee health from pesticides. With decisive studies like this one being published almost weekly, decisionmakers have the science they need to take action and protect bees. EPA, step up.

Take action » Call on EPA's leader, Gina McCarthy, to make protecting bees from pesticides a top priority. The science is clear, it's time for action.

This blog originally appeared on GroundTruth.