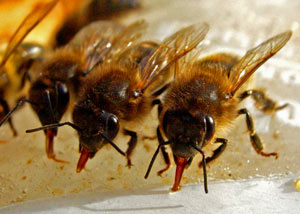 Posted at 01:29h in Uncategorized by community@panna.org
0 Likes

The online journal PLoS One released two bee studies last week: one on an old parasite newly found in honey bees, the other confirming that bees are being poisoned by the controversial pesticide clothianidin in and around the 88 million acres of U.S. countryside planted with treated corn seeds.

The parasite study was covered by Associated Press and has been widely circulated in USA Today, UK Telegraph and elsewhere under the provocative title: “Zombie fly hijacks bees’ bodies and may explain die-off.” On a near-annual basis since colony collapse disorder (CCD) first hit the news in 2005, media have reported the discovery of one pathogen or another “solving” the mystery behind the recent, catastrophic bee die-offs in which U.S. honey bee hives are disappearing at an average annual rate of 32%.

The current consensus, however, is that the die-offs are likely driven by a causal complex in which pesticides, pathogens and nutrition each play a role.

The pesticide study confirms a series of especially damning findings: multiple exposure routes at critical times and toxic levels for a suspect pesticide on a common crop.

Getting it from all sides

The January 3rd pesticide study out of Purdue University has yet to be covered in a major media outlet, but it confirms a series of especially damning findings: bees face multiple pesticide exposure routes (pollen, dust, soil, nearby untreated plants, planter exhaust) at critical times (as nurse bees are emerging) and at toxic levels, for a suspect class of pesticides (neonicotinoids) on a common crop (corn) that commercial beekeepers say is particularly harmful to their hives.

Pollen collected directly from the treated plants was contaminated by clothianidin as expected, but bee-collected pollen samples showed higher levels, indicating additional pathways of exposure. This finding is of particular concern because clothianidin is even more toxic when ingested orally by a bee (2.8 ng/bee vs. 22 – 44 ng/bee contact toxicity).

Overall, the issue investigated and confirmed by the Purdue study is that bees are “getting it from all sides” in a mixture of modalities that probably ultimately defy quantification. Bees in and near corn fields face contact toxicity (drift of soil or planter exhaust) and oral toxicity (ingestion of contaminated pollen or guttation droplets) from a suite of pesticides, the most toxic of which persists and therefore accumulates for years in the environment. Clothianidin, which is among the most bee-toxic of the neonicotinoids, has a half life of between 148 and 1,155 days.

Among the Purdue study’s (PDF) new and potentially surprising findings are the establishment of two previously unrecognized exposure routes, one through contaminated “planter exhaust” and another through untreated-but-contaminated dandelions in nearby fields from which bees are known to gather nectar and pollen.

“Extremely high” levels of clothianidin and thiamethoxam (both neonicotinoids) were found in planter exhaust material exuded into the soil and air during and after the planting of treated corn seeds. Planter exhaust tends to be especially mobile in the environment, and is likely dispersing to nearby fields and other plants.

Timing is another special concern pursued by this study. Corn is planted throughout the Midwest from mid-April through early May, when the energy requirements of bees are increasing rapidly, as increased foraging is required as hives prepare for colony growth. Recent studies have established the potential for cascading, sublethal effects when developing bees are exposed to pesticides within the hive through stored pollen (e.g. royal jelly, brood comb).

During the period observed in the Purdue study, emerging nurse bees were feeding on pollen reserves in the form of royal jelly. Authors calculated that, at the levels observed, a new bee would consume 50% of the oral LD50 (a common measure of acute toxicity, the amount required to kill 50%) during the 10 days it spends as a nurse bee.

Readers may recall that in December of 2010, PAN and Beyond Pesticides joined beekeepers in urging EPA to take action to protect bees from clothianidin on corn and canola. These two crop uses were concurrently evaluated and approved.

Based on a leaked internal agency memo (PDF) that quietly downgraded the single field study on the basis of which clothianidin’s conditional registration had been granted, we pressed for immediate withdrawal until some scientifically valid evidence of clothianidin’s safety for bees could be offered. The study in question, funded by Bayer, suffered from a number of flaws including the lack of a control group and a suspiciously inappropriate focus on canola instead of corn.

This last point is relevant because bees forage from corn’s abundant pollen, as confirmed by the Purdue study in which corn pollen made up over 50% of the pollen collected by bees, by volume, in 10 of 20 samples. Corn is also by far the more abundant crop, covering more U.S. arable land than any other crop — 88 million acres and growing.

The nail in the Bayer study coffin, if it needed one, is this: the Purdue study found that bee-collected pollen from clothianidin-treated corn were 10 times more contaminated than the deeply flawed Bayer study (PDF) in canola had shown.

We’ll be taking action in the coming weeks, stay tuned.

This was originally posted on GroundTruth.