Bayer, bees & the Hall of Shame 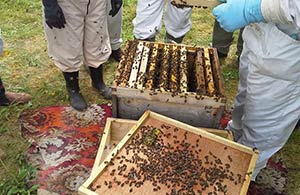 Posted at 23:46h in Uncategorized by community@panna.org
0 Likes

This may be the only time you see PAN nominate a pesticide manufacturer for an award.

Every year, our friends at Corporate Accountability International (CAI) highlight the year’s worst corporate actors in their Corporate Hall of Shame. The Hall of Shame helps hold corporations accountable for the most egregious examples of corporate abuse. This year, we’re partnering with CAI to nominate a particularly bad actor in our food and farming system: Bayer CropScience.

Here at PAN, we’re committed to shining a light on the misdeeds of the Big 6 — the world’s largest pesticide companies. Bayer is one of them. In addition to aspirin, the German-based corporation manufactures bee-harming neonicotinoids and is a long-time peddler of hazardous pesticides.

Bee declines have been front-page news for years, and evidence continues to mount that pesticides — particularly neonicotinoids — are a key culprit. Independent science has found that neonics like Bayer’s imidacloprid and clothianidin can kill bees outright. At lower doses, they’re known to weaken bees’ immune systems and impair important brain functions, impeding the ability to navigate, forage for food and reproduce.

Any corporation that puts profits above the integrity of our food and farming system deserves to be taken to task. Bayer is certainly catching some heat for its bee-harming products; most recently, a group of Canadian beekeepers launched a class action lawsuit against Bayer and Syngenta for negligence in the design and sale of neonicotinoids.

But so far, Bayer has stood unapologetically by its neonic products. Why? Neonics are the most widely used insecticide in the world — and a major contributor to Bayer’s bottom line. In 2009, Bayer raked in $1.1 billion from sales of imidacloprid and $439 million from clothianidin.

We all have a lot to lose if bee populations keep plummeting, since bees are responsible for one in three bites of food we eat. But while the general public is relying on decisionmakers to protect bees from pesticides, Bayer has a vested interest in keeping these chemicals on the market.

To distract from the role their products play in bee declines, Bayer has invested in a high-profile PR campaign to spin themselves as bee-friendly. As a report by Friends of the Earth has shown, Bayer relies on tactics straight out of Big Tobacco’s playbook to manufacture doubt about the role of pesticides in bee declines.

The science clearly shows that multiple, interacting factors — including neonicotinoids, other insecticides and fungicides, habitat loss and pathogens — contribute to declining bee populations. But Bayer consistently pushes its “everything-but-pesticides” party line, using a wide array of tactics (and very deep pockets!) to broadcast their message.

In 2013, the company launched a national “Bee Care Tour,” trucking spokespeople across the country for speaking engagements at research universities (many of which rely on Bayer’s funding for research). Bayer has also built large bee research centers in North Carolina and Monheim, Germany, equipped with extra-large models of the varroa mite, the company’s catch-all explanation for pollinator declines.

The corporation has even produced two children’s books to help its talking points about bees reach a younger audience.

These ambitious PR efforts weren’t enough to silence independent science in the European Union, and in December 2013 the EU enacted a two-year moratorium on neonics. In response, Bayer joined with Syngenta to sue the European Food Safety Authority for its decision.

Although Bayer is digging deep in its coffers to improve its image, it seems that people aren’t buying Bayer’s message.

No matter how many sleek research centers or larger-than-life varroa mites Bayer builds, more and more people know that Bayer’s products are among the primary culprits in bee declines, and that many of their pesticides are also hazardous to human health.

Take action: Shine a light on Bayer’s bee-washing: vote for Bayer in the 2014 Corporate Hall of Shame and make sure they feel the heat.