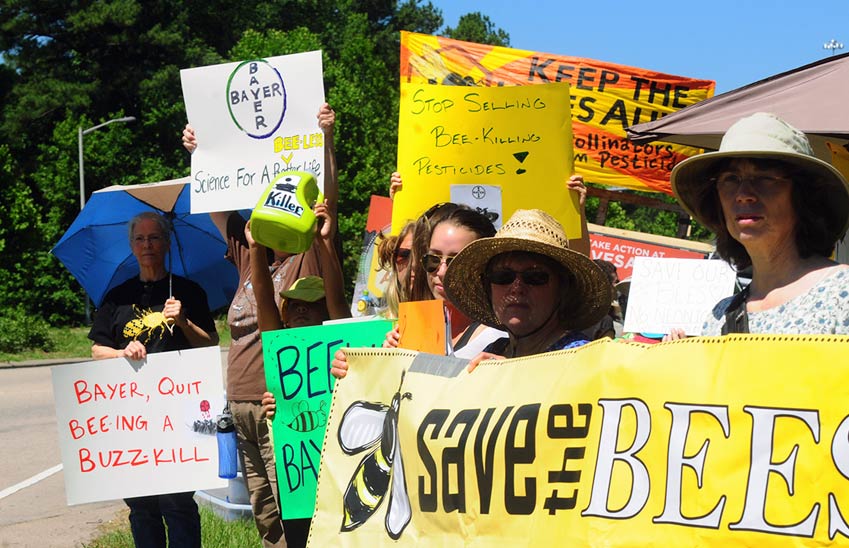 Posted at 19:31h in Uncategorized by community@panna.org
0 Likes

Outside Bayer’s North Carolina headquarters this week, a beekeeper stood with 2.5 million dead bees — a symbol for the number of kills U.S. beekeepers face across the country annually — thanks in part to the bee-harming pesticides that Bayer and others manufacture.

This was one stop on the beekeeper-led Keep the Hives Alive Tour, which made its way across the country during National Pollinator Week. The tour's aim is to build momentum for state and national action to protect bees and support farmers and beekeepers at each stop, in each region.

The tour is also part of the effort to reclaim National Pollinator Week, an occasion that has increasingly become a platform for Bayer and Syngenta — the two largest manufacturers of bee-harming neonicotinoids — to promote their supposed care and support for pollinators. Remember, not only do these corporations manufacture, sell and aggressively promote bee-killing pesticides, but they also coat seeds in the stuff. And they partner with other corporations like Monsanto to do the same, making crops grown across the U.S. toxic to bees and other pollinators. You don’t have to look any further than their Twitter accounts to see continued evidence of “beewashing,” redirecting attention on bee declines away from pesticides and towards individual or consumer responsibility.

James Cook, the Minnesota-based commercial beekeeper who drove the dead bees to North Carolina on his 15-foot truck, spoke about why this might be:

“[Bayer doesn’t] really want to talk about and look at what is actually going on with the relationship between pollinators and pesticides because I think they know what they would find.”

PAN staff and board members joined a few stops of the tour on its way from Sacramento to Washington, DC. At the final stop yesterday in front of the Environmental Protection Agency, beekeepers and food safety partners delivered nearly 5 million signatures calling on the agency to do its part and protect bees from pesticides. This message was underscored by a letter from nearly 200 organizations, urging federal policymakers to get moving and pull bee-harming pesticides off the market.

Bayer and their allied industrial agricultural groups have been incredibly effective at stymieing progress at EPA the U.S. Department of Agriculture, as well as in state legislatures and agencies. Take, for instance, the recent defeat of California’s Pollinator Protection Act earlier this month thanks to significant industry pressure. And, according to a new report by Friends of the Earth out last week, it shouldn't be a surprise. Aggressive lobbying, campaign contributions and public relations are widely used by the “Big 6” pesticide and seed companies to maintain market control.

In North Carolina, bee advocates invited Bayer to listen to their concerns and speak openly with them at the friendly public education event outside their offices. As evidenced in the Twitter exchange below, Bayer wasn't interested and instead focused on closed door meetings with a select group, shutting out the larger group and ignoring their concerns.

Does @Bayer4CropsUS care to hear the concerns of beekeepers, farmers, scientists, and consumers? #wheresbayer #keephivesalive

.@Bayer4CropsUS we are happy you want 2 engage in private meetings but disappointed you missed the stories shared here today #keephivesalive

Bottom line: @Bayer4CropsUS chose not to come & listen as those most impacted told their stories today. #keephivesalive #unfortunate #truth

This year, we’re taking back National Pollinator Week for the pollinators and our food system. Join us online to keep the spotlight on industry shenanigans — and to keep the pressure on policymakers to step up!