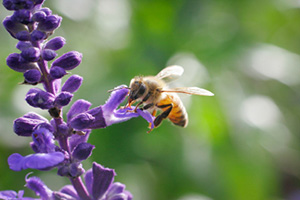 Posted at 04:21h in Uncategorized by community@panna.org
0 Likes

Honey bees are up against a lot these days, no thanks to a lack of action from EPA. And new data released today adds to the growing list of concerns for pollinators: home garden plants that come pre-treated with bee-harming pesticides.

In a pilot study released today by the Pesticide Research Institute and Friends of the Earth, the groups tested plants from major home garden stores across the country, and found that more than half of the samples contained pesticides at levels shown to harm or kill bees.

This adds a new dimension to the broader picture of pesticides and bee health, especially for home gardeners — like me — intending to grow bee-friendly plants but inadvertently introducing bees to harmful pesticides. These neonicotinoids ("neonics") are making their way into home gardens without our knowledge. And they can leech into the soil from pre-treated plants and be absorbed by plants growing nearby.

Here, there and everywhere

We've known for some time that use of neonics was widespread; they're the most widely used class of insecticide in the world. They’re applied to more than 140 crops, including much of the corn grown in the U.S. And now, it turns out, we can also find them on bee-friendly plants like tomatoes, Gaillardia and Salvia purchased at a local garden store.

The science is increasingly clear when it comes to neonics; they’ve been linked to massive bee kills and they can interfere with the brain functions that bees need to navigate, forage and reproduce. Especially in combination with other common pesticides — and factors like habitat loss and pathogens — neonics are a catalyst for bee declines.

My colleague Emily Marquez, PhD, and PAN's staff scientist, put it like this:

"Bees have enough troubles; there’s no need for home gardens to add to the problem. Studies indicate that widespread use of systemic pesticides like neonicotinoids is contributing to major bee kills around the globe. And even at doses that don’t kill bees, neonics weaken bee immune systems and impair critical brain functions, making it hard for bees to find their food sources and return to the hive.”

Retailers must do their part

The results of this pilot study are worrisome. They tell us that neonics may be hiding where we don’t expect them. But this information also creates new opportunities for action from consumers and retailers.

The results of this pilot study are worrisome. They tell us that neonics may be hiding where we don’t expect them.

Major garden stores like Home Depot and Lowe’s have a responsibility to take neonics off their shelves and to ensure that the plants they sell don’t come pre-treated with these bee-toxic chemicals. There’s precedent for it: retailers in the UK took this step in January, with pressure from our allies at Friends of the Earth Europe and PAN UK, and it helped pave the way for the EU’s important decision to implement a two-year restrictions on neonics.

Here in the U.S., we’re still waiting for EPA to step up and take the kind of swift action that is needed to protect bees. But as pressure mounts on the agency, retailers have a chance to get ahead of the curve and begin to phase out neonicotinoids now. And in the meantime, diligent home gardeners will keep working to make their backyards truly bee-friendly by creating the right food, water and shelter for bees — and, of course, not applying the same hazardous pesticides in their yards.

Take action» Backyard gardens should be part of the solution, not part of the problem. Sign a petition asking major garden retailers to stop selling neonic-treated plants and all neonicotinoid products.