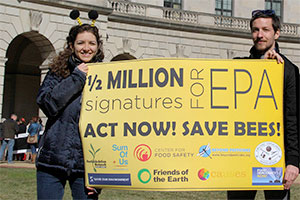 Pressure on the Environmental Protection Agency to safeguard bees continues to grow stronger. Today in DC, PAN joined partners to hand deliver a message from more than half a million people to EPA Administrator Gina McCarthy: Step up and prioritize protecting bees from harmful pesticides.

Even though independent studies clearly show that neonicotinoid pesticides (or “neonics”) are hazardous to bees, EPA won’t conclude its review of these chemicals until 2018. Meanwhile, neonics are the most widely used class of insecticides in the world. And bee populations continue to decrease at alarming rates.

And despite numerous studies linking neonicotinoids with bee kills, colony collapse, and weakened immune systems, EPA continues to operate under an alarmingly slow registration review process that extends to 2018.

Last year, beekeepers reported losing 40-70% of their colonies, and some were forced to close their businesses as a result. Loss data has not yet been released for this year, but the trend will likely hold steady. Since 2006, commercial beekeepers have lost a third or more of their bees each year. Beekeepers, including Jim Doan in New York, are incredibly concerned and calling for real action:

“Beekeepers are losing colonies at an unprecedented rate – the losses are too extreme to keep up with, and our entire industry is at risk of collapse unless federal action is taken. Convening conferences and changing pesticide labels is lip service and window dressing to the issue, but has no substance.”

Honey bees are responsible for producing one in every three bites of food we eat, and the estimated value of the pollination services they provide for agriculture in the U.S. is $19 billion. Almonds, apples, cherries and many more fruits and vegetables rely on bees for pollination.

A growing body of scientific evidence shows bees are being harmed by widespread use of neonicotinoids, both alone and in combination with other pesticides. It’s the job of the EPA to review such pesticides for safety — and take decisive action when they’re found to be harmful.

In the absence of federal action, several states have taken action independently to introduce legislation that would restrict the use of bee-harming pesticides. California, Minnesota and New York are among the states considering action in their state legislatures. And this month, Eugene, Oregon became the first city in the country to restrict the use of neonicotinoids on city property.

Congress is also pushing to curb the use of neonicotinoids through the “Save America’s Pollinators Act” (HR 2692), introduced by Representatives John Conyers (D-MI) and Earl Blumenauer (D-OR). This bill would mandate EPA to remove neonics from the market until their review is complete.

Keeping the pressure on EPA, a growing coalition collected the messages delivered to the agency today. Participating groups include PAN, Avaaz, Beyond Pesticides, Causes, Center for Food Safety, CREDO, Food Democracy Now!, Friends of the Earth US, Organic Consumers Association, Save Our Environment and SumOfUs. Together, we’re pushing EPA on all sides, urging the agency to step up and do the right thing.

Bees need help, and they need it fast.

Take action» Help keep this important issue front and center! Create a pesticide-free Honey Bee Haven in your yard, invite your friends and neighbors to do the same, and spread the word!

Photo courtesy of the Center for Food Safety. This blog originally posted on GroundTruth.