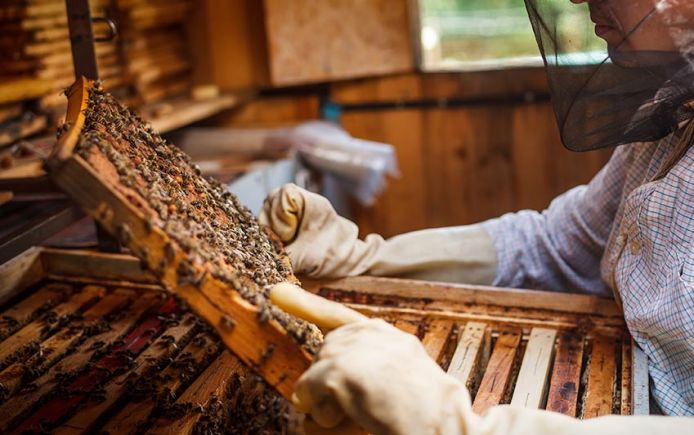 Posted at 23:55h in Uncategorized by community@panna.org
0 Likes

More than 20 years after neonicotinoid pesticides hit the market, the U.S. Environmental Protection Agency (EPA) has released its first assessment of the impacts on honey bees. Looking at one neonic in isolation — Bayer's imidacloprid — the agency acknowledges some harm to bees. But it's still missing the big picture.

EPA's assessment concludes that "imidacloprid potentially poses risk to hives when the pesticide comes in contact with certain crops that attract pollinators." The agency points specifically to citrus and cotton, where pesticide residues above EPA's acceptable level were detected in pollen and nectar.

Recognizing the risks neonics pose is real progress. But looking at imidacloprid residues in isolation fails to account for synergistic effects from multiple chemicals applied in the field, plus the widespread exposure from neonic seed coatings on commodity crops like corn and soy.

As PAN spokesperson Paul Towers noted in a recent statement,

EPA is still not seeing the forest for the trees. This assessment takes a myopic and piecemeal approach, failing to examine the far-reaching impacts of pesticide seed coatings applied to millions of acres of American farmland. This is a primary route of exposure for honey bees and native pollinators, which also play a critical role on farms and in our agricultural economy."

So how is it that these pesticides have been on the market since the mid 1990s, and EPA is only now reviewing their impact on pollinators? We can thank "conditional registration" for that.

EPA is supposed to license ("register") pesticides only if they meet standards for protection of the environment and human health. But pesticide law allows EPA to waive these requirements and grant a "conditional" registration of a new pesticide when health and safety data are lacking.

In other words, this loophole allows companies to sell a pesticide before EPA gets safety data. And it's a fairly common practice. According to research from the National Resources Defense Council, as many as 65% of more than 16,000 pesticides have been allowed on the market through this loophole.

EPA's Jim Jones — Assistant Administrator of the Office of Chemical Safety and Pollution Prevention — noted that this is the agency's "first time assessing the health of the colony for the neonicotinoid pesticides.”

U.S. beekeepers started sounding the alarm about dramatic bee declines in 2006, and every year since have reported losing a third or more of their hives. Today, most scientists agree that there are multiple challenges at play, including habitat loss, pathogens and pests — with pesticides as a compounding factor.

As we've noted before, a growing body of independent science has highlighted the harmful impacts of neonics on bees and other pollinators, ranging from immediate death to disrupted navigation, reduced foraging capacity and impaired immunity to common disease.

In addition to overlooking synergistic effects with other pesticides, EPA's piecemeal approach to reviewing the impacts of neonics on pollinators doesn't do enough to look at how bees are exposed to neonics in the field. For instance, the agency's "chronic" toxicity measures are still too short (10 days). A study that looks at neonic impacts on honey bees for 30 days estimates that much lower doses may cause long-term lethal effects. Finally, EPA's assessment isn't equipped to look at cascading stressors — how a colony weakened by pesticide exposure is more vulnerable to the Varroa mite and other diseases and pathogens.

Using honey bees as a proxy for native bees and other pollinators also misses the mark. While EPA has set its level of concern for imidacloprid at 25 parts per billion (ppb), bumble bees begin to show impaired foraging at much lower levels of exposure.

This has serious implications for our food system. A recent study from the University of Vermont and UC Davis found that wild bees are also in decline in many of the parts of the U.S. where their pollination services are needed most. From California's Central Valley to the Midwest Corn Belt, native bee populations have declined significantly. In 39% of the agricultural land where pollinator-dependent crops are grown, there's a mismatch between the pollination needs of the crops and the pollinator populations. While managed honey bees are often brought in to fill the gap, the combination of increased demand and colony declines mean that beekeepers and managed honey bees can't close the gap on their own.

And seed coatings — prevalent on conventional corn and soy, as well as other crops — means there's widespread exposure from planter dust, leading to contaminated waterways, soil and nearby plants.

This imidacloprid report is the first of four pollinator risk assessments for neonics due from EPA by December 2016. We hope the agency takes a more careful and comprehensive look next time around — and finally, finally implements meaningful policies to protect pollinators from this known threat.