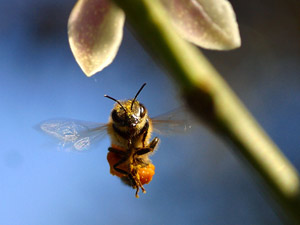 Posted at 17:32h in Uncategorized by community@panna.org
0 Likes

All too often, the rules of pesticide regulation are cumbersome and make for slow change. But EPA had an opportunity to take swift, decisive action to protect bees — and they let it pass.

Today, the agency announced it is denying the request by beekeepers to declare Bayer’s pesticide, clothianidin, an “imminent hazard” to bees and will not be suspending the chemical’s use.

The decision comes in response to a legal petition filed earlier this year by twenty-five beekeepers and environmental organizations, citing acute and chronic bee kills across the country linked to neonicotinoid pesticides like clothianidin.

Steve Ellis, one of the petitioners and owner of Old Mill Honey Co, with operations in California and Minnesota, says the beekeepers are disappointed.

EPA has signaled a willingness to favor pesticide corporations over bees and beekeepers. This decision puts beekeepers, rural economies and our food system at risk. And the injury we are sustaining this year will be unnecessarily repeated.

Bees are running out of time

This spring and summer, beekeepers from New York to Ohio and Minnesota are reporting extraordinarily large bee die-offs due, in part, to pesticides exposure. The die-offs are similar to what beekeepers have reported in the past few weeks in Canada (where EPA has admitted there are 120 bee kill reports, a huge number).

According to USDA, beekeepers have been losing an average 30% of their honey bee colonies each year since 2006 – but some are losing many more.

New scientific studies continue to emerge that clearly point to pesticides, along with pathogens and nutrition, as a key catalyst of these alarming bee die-offs. And recent studies in both the U.S. and in Europe show that small amounts of neonicotinoids — both alone and in combination with other pesticides — can cause impaired communication, disorientation, decreased longevity, suppressed immunity and disruption of brood cycles in honey bees.

Neonicotinoid treatment of corn seeds is thought to be one of the leading pathways for exposure.

What are they waiting for?

Last month, over 250,000 people from across the country urged EPA to follow the science and move swiftly to suspend the use of clothianidin. At the same time, pesticide manufacturer Bayer CropScience has attempted to refute (and discredit) new key scientific information showing the hazard clothianidin poses to bees. According to Paul Towers, media director for PAN, EPA is failing to follow the science.

This is a stark reminder of the power and influence of pesticide corporations, when the agency fails to act despite significant impacts to the livelihood of beekeepers and rural economies.

While refusing to issue an immediate suspension, the agency has agreed to open a 60-day public comment docket to review additional points raised in the legal petition. The comment period starts next week. Officials expect to complete the evaluation in 2018, and any implementation plans could take years beyond that to put into place.

Beekeepers and environmental groups cite EPA’s current timeline for making a decision on the safety of neonicotinoids for honey bees as too slow, and filed the “imminent hazard” legal claim in hopes of more immediate action. With today’s announcement, that hope is waning.