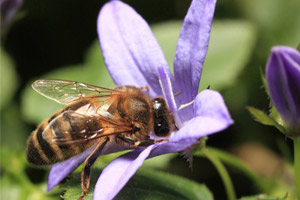 30 May EU flags another bee-harming pesticide

Regulators across the pond are keeping up the momentum to protect pollinators, with a new report from the European Food Safety Authority (EFSA) adding fipronil to the list of bee-harming pesticides the agency is concerned about.

Earlier this year, EFSA raised the alarm about three other insecticides that pose a threat to bees. And the EU responded with a two-year ban on the use of those chemicals. We have yet to see if fipronil will be added to the list of restricted pesticides, but EFSA’s conclusion signals that protections for bees are more likely.

While European regulators are taking proactive steps, EPA is still dragging its feet. And it’s not because the issue is any less dire here in the U.S. Beekeepers continue to report record-breaking losses this year. As PAN’s Director of Organizing and Media Director Paul Towers notes:

If the cycle of EPA inaction and pesticide proliferation keeps up, bees may not be able to recover. And that’s everyone’s problem, since bees pollinate one-third of the food we eat. We rely on the pollination services bees provide every day.

Fipronil is an insect nerve agent from German-based pesticide giant BASF; it is often used as a seed treatment and to protect pets from fleas and ticks.

Although not a neonicotinoid like Bayer’s clothianidin, fipronil is a threat to bee health. EFSA concludes that it poses an “acute risk to honey bees when used as a seed treatment for maize.” Fipronil-based products have been on the market since 1993 and, according to BASF, are used in more than 70 countries.

EFSA’s report this week has the pesticide industry scrambling to defend its products once again. Employing a familiar tactic, BASF’s spokesperson responded to the new report by saying that bee die-offs should be blamed on “other causes,” and the problems facing bees are so complex that there’s no point regulating any single factor.

While there are indeed multiple factors at play — including pathogens, nutrition and habitat loss — the body of emerging science shows pesticides are clearly a key catalyst. And a factor policymakers have the power to do something about.

While it’s too soon to tell if EFSA’s fipronil findings will lead to additional protections for bees as was the case with the neonicotinoid ban, the EU continues to take concrete steps to protect these vital pollinators. It’s past time for EPA to do the same.

Take action » With beekeepers in this country reporting 40-70% bee losses this year, action to protect honey bees is more urgent than ever. Tell EPA to step up and protect bees from harmful pesticides.