Europe steps up. EPA, let’s do this! 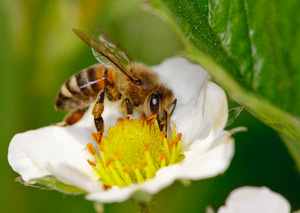 In a historic vote on Monday, the European Union (EU) passed a continent-wide restriction on the use of bee-harming pesticides. Despite immense pressure from the pesticide industry, a majority of EU countries sided with bees.

Here in the U.S., policymakers have yet to step up. And with beekeepers in this country reporting record-breaking bee losses this year — up to 40% or more — action to protect honey bees is more urgent than ever.

The EU vote comes after significant findings by the European Food Safety Agency (EFSA) that neonicotinoid pesticides (or neonics) in particular pose an unacceptable risk to bees.

With a simple majority of 15 nations voting in support of the neonic ban on Monday, it didn't gain the required “qualified majority.” Protocol in this instance leaves the final decision to the European Commission, which has signaled full support. As stated by Tonio Borg, Health and Consumer Commissioner:

"I pledge to do my utmost to ensure that our bees, which are so vital to our ecosystem and contribute over €22 billion annually to European agriculture, are protected."

With the European Commission's backing, the two-year ban will go into effect in December, restricting the use of bee-harming neonics clothianidin, imidacloprid and thiamethoxam throughout the EU.

While powerful grassroots support of bee-protective policies has been growing, the prospect of restrictions on use of their pesticide products prompted a "fierce behind-the-scenes campaign" from Bayer and Syngenta. Bayer manufactures clothianidin and imidacloprid, while Syngenta produces thiamethoxam.

As reported in The Guardian:

The chemical companies, which make billions from the products, have lobbied hard, with Syngenta even threatening to sue individual European Union officials involved in publishing a report that found the pesticides posed an unacceptable risk to bees.

Other pressure tactics employed by the pesticide industry include distorting scientific findings, blaming harms to bees on farmers and convening with decisionmakers behind closed doors.

More work to do

While the new EU ban is a huge victory for bees — and the network of organizations and individuals working for bee-protective policies throughout Europe — there is more work to be done. Referencing the fact that the ban will expire in two years, Keith Tyrell, executive director of PAN-UK, released the following statement:

“Whilst we welcome the EU vote as a significant step forward, we are dismayed that it is only a temporary half measure which goes nowhere near far enough in protecting our bees and other vital pollinators from the harm of neonicotinoid pesticides."

Here in the U.S., policymakers have yet to take decisive action on behalf of bees. While loss of habitat, pathogens and nutrition all play a role in bee die-offs, a growing body of scientific evidence points to pesticides as a key catalyst. And since neonics are a known factor, policymakers can (and should) address the issue. Quickly.

As PAN spokesperson Paul Towers says, time is of the essence:

"Unless U.S. officials act soon, bee populations may not recover, threatening the livelihood of beekeepers and the agricultural economies that rely on pollination and honey production.”

Bees pollinate one in three bites of food we eat and sustain our agricultural economy. We all rely on them daily, and they are in dire need of help. EPA, time to step up.

Take Action » Urge EPA to protect bees from harmful pesticides. The science linking pesticides to bee die-offs is only getting stronger. And bees are getting sicker. Protecting these vital pollinators is more urgent than ever.