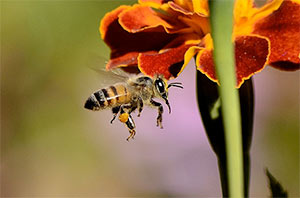 Posted at 21:03h in Uncategorized by community@panna.org
0 Likes

Pesticide corporation Syngenta is pushing the Environmental Protection Agency (EPA) to allow even more use of one of its bee-harming neonicotinoids, thiamethoxam. But with science clearly showing that neonics harm bees and other pollinators — contributing to dramatic die-offs in recent years — allowing increased use of this chemical would be a striking move in the wrong direction.

If EPA grants the request, more thiamethoxam will be applied to common crops — including corn, soybeans, wheat and alfalfa — that cover over 250 million acres of U.S. farmland, much of it in the Midwest. The proposed residue level increases vary by crop, but some would go up by as much as 400 times what is currently allowed.

Already one of the most widely used insecticides in the world, higher tolerance levels for thiamethoxam would pave the way for Syngenta to introduce a new use of the neonic: foliar spray. To date, it's been largely used as a seed coating, but the corporation sees a growing market for directly spraying plants.

The problem, however, is that pesticide spray has a tendency to drift from where it's applied — to neighboring crops and flowering plants where bees may be foraging, or even to surface water. Bees would be exposed to even more of the damaging chemical than they already face.

Heading in the wrong direction

According to a Syngenta spokesperson, the corporation is "committed to biodiversity, including thriving pollinators." But with a preponderance of evidence showing links between declining bee populations and the widespread use of neonics, Syngenta's actions are in direct opposition to the corporate line.

Even when exposed to low doses that aren't immediately lethal, neonics wreak havoc on bees — suppressing their immune systems and disrupting their ability to navigate, forage for food and return to the hive, among other things. These impacts, in combination with other stressors, has contributed to annual hive losses of 30% or more since 2006.

If Syngenta gets its way, additional use of thiamethoxam will add to the burden of pesticide exposure bees and other pollinators are currently struggling under. And as beekeepers report, their industry is already on the verge of collapse.

Reducing the use of harmful pesticides is one thing EPA and other decisionmakers can — and should — do something about. Adding higher levels of bee-toxic neonics into the mix will take us further, and faster, down the wrong road.

Take action » Before the EPA comment period closes on October 6, join us in urging the agency to reject Syngenta's bee-toxic plan. It's time for decisionmakers to step up and address the known threat neonics pose to bees, not allow more widespread use!