Even small doses are big trouble for bees 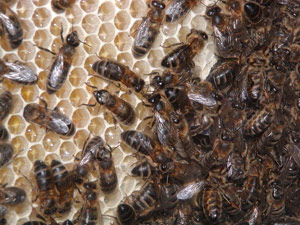 Posted at 19:06h in Uncategorized by community@panna.org
0 Likes

New science confirms that honey bees are at great risk when simultaneously exposed to parasites and pesticides.

Two pesticides of concern, fipronil and thiacloprid (a neonicotinoid), operate in combination with a common pathogen to dramatically increase bee death. And they do so at very low, sub-lethal levels.

It is estimated that seven in ten U.S. bee hives are infected with the parasite Nosema ceranae. A study released in June found that 47% of infected bees die. However, when also exposed to low levels of pesticides, the mortality rate jumps to 71%.

On their own, both parasites and pesticides pose dangers to bee populations. But collectively, their impact is dramatically increased, even when the pesticide exposure is minimal. The study showed that a daily exposure to 1/100th concentration of the LD50, the dose at which 50% of the population dies, "significantly affects the mortality rate of N. ceranae-infected honey bees."

Bees have been dying off in droves around the world since the mid-1990s. First in France, then in the U.S. and elsewhere, colonies have been mysteriously collapsing with adult bees disappearing, seemingly abandoning their hives. In 2006, about two years after this phenomena hit the U.S., it was named “Colony Collapse Disorder,” or CCD. It's becoming increasingly clear that multiple, interacting causes are at play in CCD, and that immune system damage is a key factor.

Bees provide for us all

Honey bees pollinate one in every three bites of food we eat, and they need our help. This month we honor World Food Day and U.S. Food Day. Why not celebrate the variety and abundance made possible by these noble and necessary creatures?

Invite friends and family over for a meal, download a dinner discussion guide and reflect on the various ways we rely on bees for daily nourishment.