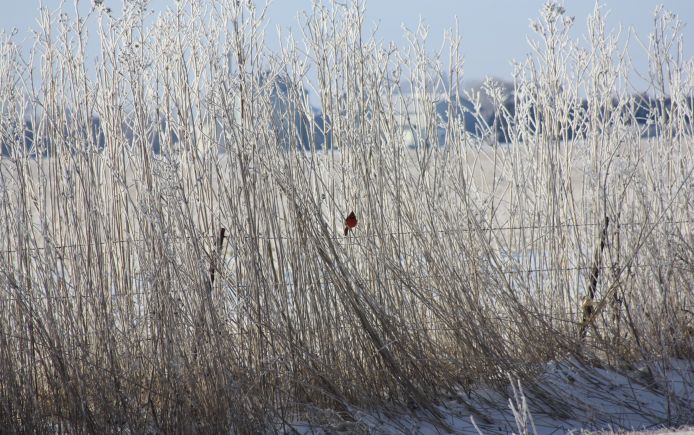 Posted at 21:36h in Uncategorized by community@panna.org
0 Likes

I have been watching, on and off throughout the last few weeks, as one of our neighbors methodically removes all of the bushes and small trees that populate a fence line between their field and another neighbor’s field.  One side of the fence has been planted to field corn every year since 2010, and the other alternates between corn and soybeans.  By removing the woody perennials between the two fields, they might each get another row or two of field crop.  But, I find myself doubting the wisdom of this effort.

When did it become imperative that we put every scrap of land into service for personal gain?  Why is it so difficult to leave even these small parcels of habitat available to wildlife?

There is a gate that once held a position of prominence on our farm during the days when there were more pigs than chickens and others worked the land that is now under our care.  Today, a gate post holds up one side of the gate and a tree holds up the other.  The tree, being the obstinate sort, has decided it wants to be where it is and it will slowly swallow up the gate by growing around it.  It is possible that we could have removed the gate during the first couple of years of our stewardship, but there were so many other things on our ‘to do’ lists that this task was barely worth a mention.

Now, I usually don’t take notice of the gate at all during the growing season.  Leaves and grasses hide it from my vision and it really doesn’t lead to anywhere that I want to go.  Instead, it waits until the late Fall and Winter months to remind me of its presence.  When the leaves are gone and the grasses and other plants have died back, I start considering whether or not this area is due to be ‘cleaned up’ this year or not.  The answer, thus far, has been ‘not now.’  It is possible that the answer for us might even be ‘not ever.’

Not every part of a working farm needs to be ‘cleaned up’ and not every gate has to ‘go somewhere.’  Too many people have a tendency to believe that everything has to work for us and that it is a sin to not take advantage of every resource.

I do not believe that the needs of the humans on the farm are, by necessity, larger, or more important, than other beings that make the farm their home.  Sometimes it is the ‘messy’ areas that become the most useful by providing that location where the frogs and toads can hibernate, or where the ground nesting bees can manage their colony with minimal disturbance.

Does this gate do anything in particular to provide habitat?  Oddly enough, it does.  The gate will not open the way it is.  Which means the humans don’t go behind it without significant effort.  The farmers put up fences to exclude pests from getting at the hens or the broccoli.  Well, here is a case where a fence is being used to keep the pesky farmers out.  In a weird way, I actually find that refreshing.

Wild places have a place on farms

Fence lines are fast becoming a thing of the past, as we continue to support the consolidation of farms into larger, corporate structures — and as we push the narrative that the only things that matter are yield per acre and acres in production.

It was just last winter that I watched a flock of a dozen Cardinals flitting around in the cover this particular fence row provided.  Flying gems that would then head over to our farm to partake in the dried berries in some of our bush lines and then back again as part of their daily routine.

I grieve a little bit every time I see another fence row flattened.  These borders have value — just like that gate on our farm.  They are reminders that the ‘wild’ places that are part of our farmscape have a purpose and that every purpose does not have to serve us.