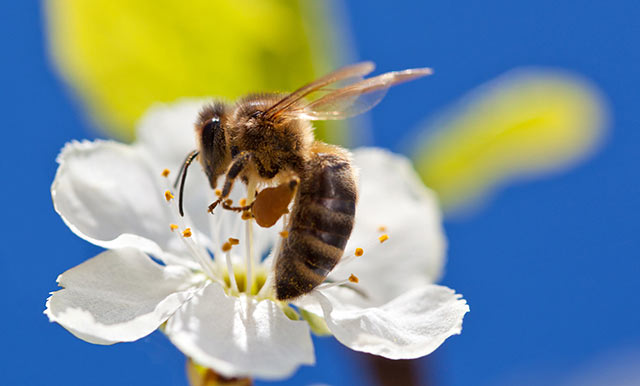 04 May Minnesota bees poised for relief from neonics

Posted at 20:42h in Uncategorized by community@panna.org
0 Likes

A few months into the Minnesota legislative session, things are starting to get exciting. In the midst of the flurry of hearings, amendments and hallway conversations that make Minnesota politics happen, there’s cause for celebration for bees at the Capitol.

This week, three members of the Minnesota House of Representatives introduced a bill that would suspend the use of neonicotinoids and fipronil — systemic insecticides that are among the driving factors behind bee declines.

As I’ve written before, Minnesota has been stepping up to protect bees. Our state’s Department of Agriculture is conducting a review of neonicotinoid pesticides, and our legislature has passed important bee-friendly bills. One new law compensates beekeepers for pesticide-related bee kills, and another makes sure neonic-treated plants can’t be labeled “bee-friendly.”

But there’s more work to be done. We know multiple, interacting factors are causing the alarming bee declines seen by beekeepers across the country. And we know pesticides, especially systemic insecticides like neonicotinoids, are a critical driver. So if we aren’t restricting the use of bee-harming pesticides, we’re not really tackling bee declines.

Though we know the bill will be strongly challenged, we also know it's step in the right direction.

We’ve all heard the stats: one in three bites of food we eat relies on honey bees for pollination. And according to the UN, of the 100 crops that provide 90% of the world's food, over 70 are pollinated by bees. And those aren’t just any crops – they’re the fruits, vegetables and nuts that provide the basis of a healthy, diverse diet. But why does Minnesota in particular need bees?

Minnesota farmers grow a lot of different crops that need pollinators to flourish: apples, melons, zucchini, cucumbers, strawberries, apricots, squash, and blueberries to name a few. We have pollinators to thank for delicious Minnesota apples — our state’s top fruit crop, apples are valued at $11.8 million annually.

And then, of course, there’s honey. Of course the pollination services that honey bees and native bees provide are crucial, but who can forget honey? Honey is a critical part of many beekeepers’ livelihoods. Minnesota has historically been one of the top five honey-producing states in the country, with honey contributing $9-13 million to Minnesota’s agricultural economy each year. But honey production is falling in the state, in large part due to annual bee losses.

There’s no doubt that bees are immensely valuable to Minnesotans. But we can’t say the same for neonicotinoids. In fact, the efficacy of these products is in question, in a big way.

The most common use of neonics is as a coating applied to seeds — like corn, soybeans, canola, dry beans or wheat — before the farmer buys them. The problem is that in most cases, by the time a pest problem starts to arise in the field, the neonicotinoid has already lost its effectiveness. In fact, many side-by-side field trials indicate that neonic-treated seeds don’t produce higher yields than neonic-free seeds.

This is especially true in northern climates like Minnesota’s, where common pests like soybean aphids aren’t well managed with neonic seed treatments. Yet most farmers are paying for the pesticide seed coating anyway, because untreated seeds can be hard to come by.

Of course, agricultural seed treatments aren’t the only use of neonics: nurseries and home gardeners use them too. The good news is that there are plenty of alternatives for home use. And many nurseries are transitioning away from neonics, recognizing that the costs for bees and our food system are too high.

Today, I’m feeling optimistic. I expect that the Minnesota Senate will introduce a companion moratorium bill next week. I know that most Minnesotans understand the connections between bee declines and pesticides, and they’re ready for policy change.

And I hope our state’s decisionmakers will catch up sooner rather than later – the resilient food and farming system that we want for generations to come depends on it.

Take action: Minnesota legislators need to hear from their constituents that a moratorium on bee-harming pesticides is a good idea. If you live in Minnesota, please call or email your state Representative and Senator and let them know you support a 5-year moratorium on neonicotinoids and fipronil.