Minnesota for the bees! 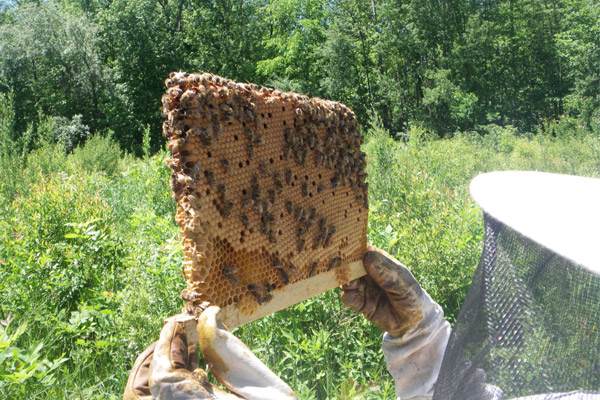 06 May Minnesota for the bees!

A few weeks ago I heard Dr. Marla Spivak give a “State of the Bees” address to a packed auditorium in Minneapolis. At the end of her presentation, an audience member raised his hand and asked: “What state is doing the most to protect bees?” Dr. Spivak only paused for a moment before answering, “Well, I’d have to say Minnesota.”

Dr. Spivak may be biased, since her Bee Lab is based at the University of Minnesota (and I guess I could be too). But I think she’s onto something: Minnesota is getting a move on protecting its pollinators.

The excitement in Minnesota is due, in no small part, to legislation introduced this session to protect pollinators. Although not much policy usually gets passed in “un-session” years like this one, it seems that folks at the Capitol can’t stop talking about bees. Two bills are making their way through the legislative process, and it looks like they both have a chance of passing.

Last week, the Minnesota House passed HF 2798, authored by Representative Rick Hansen of South St. Paul. This bill would bar nurseries from advertising their plants as “bee-friendly” if they were pre-treated with neonicotinoids. The law also classifies neonicotinoids and other systemic insecticides as “pollinator lethal insecticides.”

This is a big deal. If this bill is signed, Minnesota statute will affirm that neonicotinoids do indeed kill pollinators. Given the pesticide industry’s tireless efforts to obscure the role that pesticides play in bee declines, it’s no small feat for legislators to see through the distraction tactics. Next stop is the Senate’s version of this truth-in-advertising bill, carried by Senator Kari Dziedzic of Minneapolis. I have high hopes that it will pass.

The second bill — HF 2908 (Rep. Hansen) in the House and SF 2727 (Sen. Dibble) on the Senate side — would create an emergency response team to respond quickly to suspected pesticide kills and give beekeepers access to financial compensation if pesticides are the confirmed culprit. With bee-harming pesticides still on the market, a bill like this can help mitigate their harmful impacts for beekeeper livelihoods. As many commercial beekeepers say, what other industry could take a 40% loss every year and be expected to stay in business?

The money to compensate beekeepers for pesticide kills will be drawn from the Minnesota’s pesticide regulatory account, funded by pesticide product registration fees paid by corporations every year. Language from these bills was incorporated into an omnibus appropriations bill (HF 3172), which is currently in conference committee.

MDA is responsible for regulating pesticides throughout the state. And although they don’t often take advantage of it, MDA has the authority to institute pesticide policies that are more protective than those set at the federal level. The agency is currently conducting a special review of neonicotinoids, at the request of the state legislature, which could lead to more bee-protective policies.

The comment period for MDA’s neonic review concluded last Friday. People and organizations across the state submitted comments, encouraging the agency to take the threat of neonicotinoids seriously and limit their use.

In the comments that PAN submitted to MDA, we urged the MDA to consider the growing body of evidence that neonicotinoid seed treatments do not increase yield when used on Minnesota’s top crops, like corn, soy, wheat, dry beans and canola. We called on MDA to close the loophole that exempts seed treatments from being tracked along with other pesticide sales. And above all, we encouraged MDA to consider policy options that would reduce the use of neonicotinoids and replace them with alternatives that are safe and effective.

We weren’t the only ones nudging MDA to go farther in its review. Seventeen legislators — including pollinator champions like Jean Wagenius and Jim Davnie — signed on to comments authored by Rep. Rick Hansen, who chastised the agency for failing to consider an obvious policy option: de-registering neonicotinoids. The legislators’ comments read, in part:

These are exactly the kinds of questions that our elected officials should be asking.

I don’t think it will come as a surprise that these hopeful steps by our state’s decisionmakers are due, in large part, to mounting momentum among bee-lovers across the state. For years, PAN has partnered with committed, vocal commercial beekeepers from rural Minnesota, like Jeff Anderson and Steve Ellis. These beekeepers began sounding the alarm about neonicotinoids early in the bee crisis, and they’ve been working tireless double duty — keeping bees and calling for pesticide reform — ever since.

This persistence has gotten a new infusion of energy in the last year. In September 2013, beekeepers and small-business owners of Minneapolis-based Beez Kneez LLC lost hives to a pesticide kill. They turned their difficult moment into an opportunity to call for more protective pesticide policy. And the effort — called Healthy Bees Healthy Lives — started in Minneapolis, but the group quickly realized that the solutions to the bee crisis had to take on state policy. With easier access to the Capitol than outstate beekeepers, members of this group have spent many early mornings in legislative hearings, testifying in favor of bee-protective laws.

In the meantime, residents of a few small cities in Minnesota are working with their City Councils to become municipal Honey Bee Havens: cities and towns that pledge to abstain from using neonicotinoids on public property and create bee-friendly habitat.

Talk to the people involved in any of these efforts and you’ll hear strong agreement: this year’s progress is just a beginning. As EPA continues to drag its feet on neonicotinoids, we have high expectations that Minnesota will step up as a leader on this issue, finding smart policy solutions that move us toward healthy pollinator populations. Stay tuned! We’re just getting started.

Take action» Do you live in Minnesota? Reach out to your state Senator and urge them to support the two bee bills currently under consideration. Help keep the pressure on decisionmakers!

This blog was originally posted on GroundTruth by Lex Horan, PAN’s Midwest Organizer.