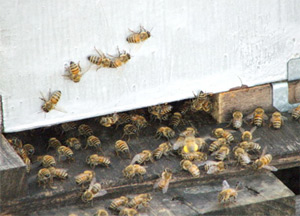 Posted at 00:00h in Uncategorized by Heather Pilatic
0 Likes

Earlier this week the European Food Safety Association issued a report concluding that neonicotinoids (“neonics”) pose an unacceptably high risk to bees, and that the industry-sponsored science upon which regulatory agencies’ claims of safety have relied are fatally flawed.

…which is exactly what we’ve been saying since 2010, when we publicized the “leaked memo” showing that EPA has allowed clothianidin (a neonicotinoid) to remain on the market despite the absence of any solid science demonstrating the chemical’s safety for bees. Last spring, PAN conducted our own evaluation of the state of the science on pesticides and bees and reached many of the same conclusions outlined in EFSA’s comprehensive review of the science (see their full report). The science is not the surprise here.

What’s significant is that a governmental body has found the fortitude to call a spade a spade. Now let’s see if European authorities follow through.

In the UK at least, things are looking moderately hopeful. The Chair of the Environmental Audit Committee, Joan Walley MP responded to the report’s findings:

The European Food Safety Authority has now reviewed the available evidence and concluded that neonicotinoids should only be used on crops that are not attractive to honey bees.

I welcome that move, but given that there is no new data here, it is extremely worrying that these pesticides were authorised for use in the European Union in the first place […]

This raises important questions about the whole European pesticides assessment regime, which the Environmental Audit Committee will now be looking into.

Meanwhile, back on this side of the pond, EPA is set to conditionally register the first in the next generation of neonicotinoids, sulfoxaflor, for a broad variety of uses. Sulfoxaflor is a kind of cousin to imidacloprid and clothianidin, with shared mechanisms of action (all work on nicotinic acetylcholine receptors — i.e. the same bug brain synapses.)

The Agency is seeking public comment on this conditional registration of sulfoxaflor, between now and February 12.