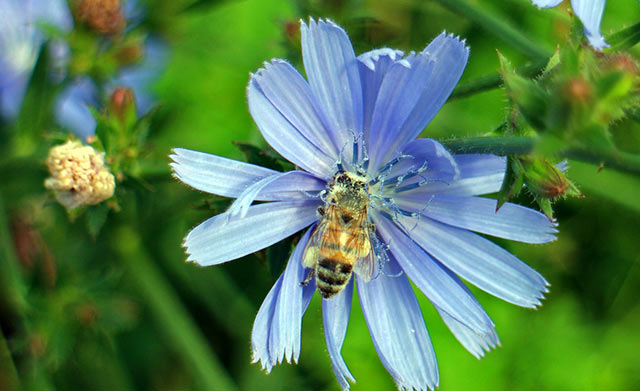 04 May Newest news on bee-harming neonics

Posted at 20:47h in Uncategorized by community@panna.org
0 Likes

Guess what? Two more studies have confirmed that neonicotinoid insecticides (aka "neonics") are bad for bees. One study documented neonics' impacts on wild bees, which hasn't been looked at much to date. The second found that bees show a preference for neonic-laced food.

A third report from the European Academies Science Advisory Council underscores the importance of the ecosystem service provided by pollinators. The scientific case for taking action to protect bees and other pollinators from neonics just keeps getting stronger.

Neonics are systemic insecticides, meaning they get taken up by the plant and show up in pollen, nectar and plant tissues. This is one of the reasons the chemicals pose such a threat to pollinators.

Wild bees… pollinating a crop near you

The first study, done in fields planted with oilseed rape in Sweden, measured effects on wild bees from use of a seed coating containing the neonic clothianidin and another, non-systemic insecticide. Researchers found negative impacts on density, nesting, colony growth and reproduction — all important markers of a thriving population of wild pollinators.

Colonies of honey bees were also assessed in this study and no short-term impacts were observed. This suggests we can't take it for granted that honey bees are an appropriate indicator species for estimating negative impacts on wild bees.

Wild pollinators make a significant contribution to ecosystems and pollination — in certain cases, wild bees alone have been known to fully pollinate crops.

The other, not-so-funny thing is that the use of seed coatings has driven a major increase in the use of neonics. To quote a recent study, 34-44% of soybean fields and 79-100% of maize acreage in the U.S. were planted with pre-treated seeds in 2011.

Bees may prefer a side of neonics

The other recent study tested how neonics influence the feeding habits of honey bees and bumblebees, using sugar water spiked with one of three commonly used neonicotinoids.

Both species of bee preferred sugar water spiked with the neonics thiamethoxam or imidacloprid, even though bees didn't taste the neonics and even though they ate less when feeding on the neonic/sugar solutions.

The authors hypothesized that bees might prefer the neonic-laced sugar water because of pharmacological action on receptors in bees' brains — basically, the bees may have gotten a buzz.

Based on these results, it looks like bees can't control exposure to neonics in their food. And because there's ample evidence that neonics have adverse effects on bees at sublethal doses, this is (again) bad news for bees.

What's an ecosystem service and why should I care?

And finally, the European report. Conducted by an expert committee of 13 scientists, this study reviewed the relation between agriculture and ecosystem services.

Even though agriculture is heavily managed, it still depends heavily on ecosystem services like pollination. The Expert Group pointed to increasing evidence indicating that:

"…widespread and prophylactic use of neonicotinoids has severe negative effects on non-target organisms that provide ecosystem services including pollination and natural pest control."

The Expert Group also concluded that prophylactic use of neonics is "inconsistent with the basic principles of integrated pest management."

Not to be a broken record, but…

We've learned these lessons before. Just last year, EPA released a report that soybean seed treatments had little to no value for farmers. One of my favorite quotes from this report:

"… in comparison to the next best alternative pest control measures, neonicotinoid seed treatments likely provide $0 in benefits to growers…"

Please keep in mind that the "next best alternatives" identified in the EPA report included organophosphates such as the neurotoxic insecticide chlorpyrifos, which has been linked to a decrease in children's IQs.

We can't "rely" on the next best alternative if it harms kids' brains. That's too high a price to pay.

It seems to me that the writing is on the wall. No more waiting. It's in our best interest to stop using pesticides for prophylactic reasons (ahem, seed treatments) and to transition off such heavy reliance on agrochemicals. Agriculture that relies on ecological principles will result in a healthier world for bees, kids and everyone else.