Pesticides & the silencing of the bees 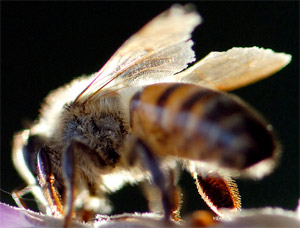 12 Sep Pesticides & the silencing of the bees

Posted at 23:06h in Uncategorized by community@panna.org
0 Likes

This month marks the 50th anniversary of Rachel Carson’s Silent Spring, the book that galvanized an extraordinary cross-section of the American public into what we now call the environmental movement. Fifty years later, her courage, skill and sacrifice still inspire, and her legacy remains the contested terrain of some of our country’s most disabling rituals of political partisanship. Pesticides still function as a kind of litmus test: either you’re for farmers and progress and “sound science,” or you’re in the camp of those reflexively “chemophobic” tree-hugging “environmentalists.” And your loyalties to one or the other of these tribes can be indexed to how you feel about pesticides.

Take bees. They have been dying off at about 30% per year since the mysterious “Colony Collapse Disorder” (CCD) was first diagnosed in the U.S. in 2005/2006. If Rachel Carson were alive today she might be writing about the silencing of the bees: honey bees and other wild pollinators (including bats and birds and bumblebees) are seeing catastrophic population declines. These losses are part and parcel of complex global problems like biodiversity collapse and climate change – they are also linked to something much more specific and discrete that we fail to name at our peril. Pesticides.

But what is interesting about the pollinator decline issue is how close to home it hits for so many. People all along the social and political spectrum are freaked out by the sudden decline of bee populations. Even those who don’t know that bees are indicator species still know, on a visceral level, that bees are canaries in the coal mine. Their declining populations signal that something is profoundly wrong – that our environment is unwell and out of balance.

So is it the neonicotinoids killing off our pollinators?

No, not alone. They likely tag-team with other pesticides. They also make bees more vulnerable to the common gut virus, Nosema. New parasites and other pathogens also play a significant role, as do habitat loss and poor nutrition. But we cannot solve this problem without addressing pesticides, they sit at the center of CCD and bee kills alike. And as if helping our farmers transition off the pesticide treadmill were not a sufficiently complex task, it seems that we cannot address pesticides without having the public conversation kidnapped by political partisanship.

Bees are an indicator species. They signal the well being of our broader environment, so their message is important. It is also one that I believe we are capable of receiving.

Our generation, and our children’s generation face overwhelming environmental issues. How do we process climate change? Water and food shortages? Biodiversity collapse? But I think of saving the bees as one of those graspable, manageable things that we can accomplish — and that when we do accomplish it, the effects will ripple and magnify. If we stop poisoning bees, they will thrive and the world we live in will be more resilient as a result.