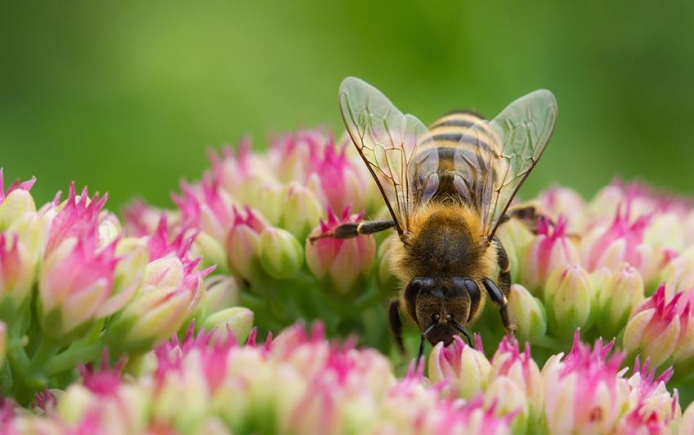 Posted at 18:23h in Uncategorized by community@panna.org
0 Likes

The last few weeks have seen encouraging momentum around the world in protecting bees and other pollinators from harmful pesticides. As bees are responsible for pollinating one out of every three bites of food we eat — making them key actors in our food system — this news is extremely welcome.

For years, independent scientific research has shown that neonicotinoid pesticides (or neonics) pose a serious danger to bees and other pollinators, both through acute poisonings and effects from chronic exposure. Documented impacts of these pesticides on bees include impaired memory and learning, disorientation, shortened adult life cycles and compromised immune response.

Policies have lagged behind this scientific evidence — but last week, encouraging news came out of the European Union (EU). After analyzing more than 1,500 studies, the European Food Safety Authority (EFSA) officially concluded that neonics pose a serious danger to both honeybees and wild bees.

Agrichemical giant Syngenta, a neonic manufacturer, was unsurprisingly dissatisfied with the finding, asserting that EFSA’s conclusions went too far. But scientists and environmentalists were thrilled with the announcement, speculating that the new finding will strengthen the likelihood of a neonic ban in the EU — as draft regulations for a ban were already revealed in March of 2017.

Beekeepers have had it

In exciting legal action across the Atlantic, a class-action lawsuit against neonicotinoid producers Bayer and Syngenta has been given the go-ahead to proceed to trial by the Quebec Superior Court.

A queen bee breeder named Steve Martineau launched the suit after observing more and more of his bees dying or being incapacitated. Upon testing them, he found traces of neonics. Martineau is seeking $20,000 in damages, and his lawyer said they’re suing on behalf of all Quebec beekeepers whose bees were non-productive or killed.

This ruling comes after even more scientific evidence against the use of neonicotinoid pesticides was published in Environmental Science and Pollution Research, concluding that the chemicals are for the most part “useless and ineffective.” And just one day before the lawsuit was given the green light, the Quebec provincial government introduced new restrictions on pesticides considered harmful to honeybees, including neonics.

On the other side of the world, beekeepers and scientists in Australia have taken notice of progress in Canada and the prospective EU ban and are calling for a ban in their own country.

David Severino, a commercial beekeeper from Phillip Island, is outspoken in his disdain for big chemical companies and the dangers their products are posing to bee populations, as well as the inaction of the Australian Pesticides and Veterinary Medicines Authority, which regulates neonics in the country. He shares his frustrations about the corporations’ influence on decision making:

The beekeeping industry is a very small industry but the dollar value for these chemicals is massive. It’s very hard to oppose their research and their views.”

But with forward momentum in the fight to protect pollinators happening in other parts of the world, grassroots action by beekeepers like David is given a boost. The EU will vote on a total ban of neonics next month, which will hopefully open doors for similar bans in Australia, Canada and around the world.