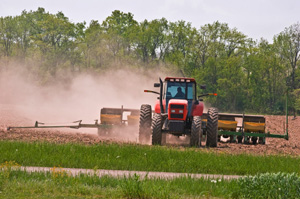 Posted at 14:36h in Uncategorized by Beyond Pesticides
0 Likes

A study by researchers at the University of Padova in Italy and published in the journal Environmental Science and Technology has confirmed the findings of previous research showing that honey bees are exposed to toxic neonicotinoid insecticides during spring seed planting. Neonicotinoids are known to be highly toxic to honey bees and, yet, are used on millions of acres through North America every year. These findings lend even greater urgency to the need to take these chemicals off the market and ensure the continued survival of honey bees and the essential pollination services that they provide for our food system.

Neonicotinoids, including clothianidin, imidacloprid, and thiamethoxam, are most commonly applied by coating crop seeds with the chemical. When these treated seeds are planted, the chemical becomes part of the plants vascular system and stays in the plant for the duration of its lifetime, expressing itself in the pollen. Previously, it had been thought that bees were only exposed to these chemicals through pollen and water droplets from treated plants, which would occur later in the season once the plants had grown and bloomed. However, the Italian study shows that bees are actually exposed to high levels of clothianidin, imidacloprid, and thiamethoxam during the spring corn planting season. This occurs because, when the seeds are planted using a mechanical seeder, small amounts of the chemical coating can be scraped off of the seeds and expelled through the planter’s exhaust as dust. Bees that are near the area or are flying through then come into direct physical contact with the chemical dust.

The findings of the Italian Research team, led by Professor Andrea Tapparo, confirm that high amounts of neonicotinoids are present in the exhaust of corn seed planters and that bees are exposed to these potentially lethal concentrations of the chemical simply by flying through the area during planting. In analyzing bees that were induced to fly through planter exhaust in a field that was being planted, the team found that there were high concentrations of clothianidin and thiamethoxam in and on the bees themselves. These concentrations were “significantly higher” than known lethal doses of the chemicals for honeybees, according to the researchers. The study included analyses of several different kinds of seed coatings as well as seed planting machines, but the team found that no modifications to seeds or planters resulted in any significant decrease in the emission of chemical dust or the contamination levels of the bees themselves. In conclusion, the authors note that,

“This emission source of particles with acute toxic effects on bees (and on other insects too) is of concern for both apiculture and crop productions based on bee pollination. But it is also a widespread ecological problem that, in view of the worldwide increase in corn production partly promoted by government subsidies to renewable energy sources, and the consequent predictable exacerbation of the problem, should require a deeper analysis of the related agricultural policies.”

This new route of exposure through seed planter dust was previously demonstrated in the work of Dr. Christian Krupke, Ph.D. at Purdue University. In that study, researchers found that, during the spring planting season, there were extremely high levels of both clothianidin and thiamethoxam in planter exhaust material produced during the planting of seed treated corn. The field soil was also found to be contaminated with these neonicotinoids, including unplanted fields. Plants visited by foraging bees, including dandelions growing near these fields, were found to contain neonicotinoids in their plant material as well. According to the Purdue research team, this indicates deposition of neonicotinoids on the flowers, uptake by the root system, or both. During the spring, when neonicotinoid levels are highest, dead bees collected near hive entrances were found to contain clothianidin as well, although whether exposure was oral (consuming pollen) or by contact (soil/planter dust) is unclear. Clothianidin was also detected in pollen collected by bees and stored in the hive.

This growing body of scientific evidence needs to be considered by the U.S. Environmental Protection Agency (EPA) in its evaluations of these chemicals. The agency recently initiated its reregistration review process for clothianidin. EPA has indicated previously that label requirements restricting applicators from spraying the chemical during blooms, when bees might be present, should be enough to ensure the safety of the bees. However, this research, as well as the systemic nature of the pesticides, irrefutably demonstrates that spray restrictions are entirely inadequate in protecting bees and other pollinators from exposure to clothianidin.

Scientists are concerned about the mix and cumulative effects of the multiple pesticides that bees are exposed to in these ways. Neonicotinoids are of particular concern because they have cumulative, sublethal effects on insect pollinators that correspond to symptoms of honey bee colony collapse disorder – namely, neurobehavioral and immune system disruptions.

Clothianidin has been on the market since 2003. With a soil half-life of up to 19 years in heavy soils, and over a year in the lightest of soils, commercial beekeepers are concerned that even an immediate stop-use of clothianidin won’t save their livelihoods or hives in time.

Dr. Krupke, the lead author of the Purdue study showing that bees are subject to multiple routes of exposure to neonicotinoids, will be speaking at the 30th National Pesticide Forum on March 30-31, 2012 at Yale University in New Haven, CT. He will be joined by other speakers including Sandra Steingraber, Ph.D., acclaimed author of several books such as Raising Elijah and Living Downstream; Gary Hirshberg, Chairman and cofounder of Stonyfield Farm; David Hackenberg, the commercial beekeeper who first discovered colony collapse disorder; and many more. To register and find more information on travel and lodging, see our forum page.

For more information on pesticides, honey bees and other pollinators, as well as what you can do, see Beyond Pesticides’ Pollinator Protection page.

This article was originally published in Beyond Pesticides’ Daily News Blog.