Wasps get a bad rap 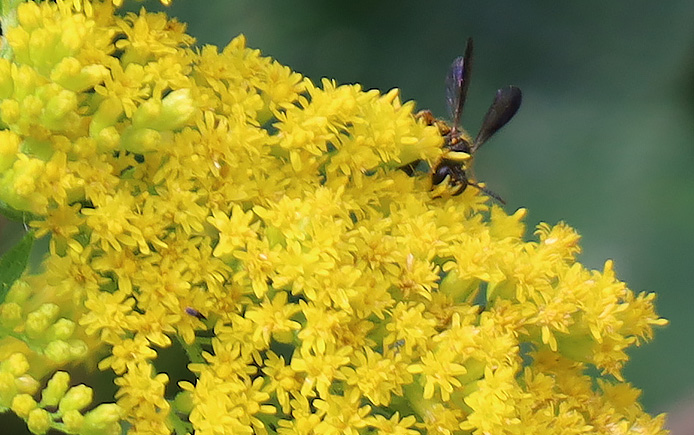 Posted at 20:11h in Uncategorized by community@panna.org
0 Likes

Some Northern Paper Wasps built a nest in the open metal pipe that is part of the door entry to one of our high tunnels.  For the most part, I was able to enter and depart the high tunnel without an issue, and I was hoping that we could make it through their normal reproductive cycle without taking any actions against them.

That might seem strange to many of you… in fact, it seems a little strange to me.  Why in the world would I want to tolerate an insect that could sting me (and others) multiple times if it felt threatened?  I can tell you, from experience, that those stings hurt.  And, in prior years, when we had people on the farm that could react badly to a sting, I was forced to be more aggressive to remove a nest in a location like this.

Most of us are raised to fear (and aggressively remove) anything that is wasp-like from our surroundings.  I know my first reaction has been, for most of my life, to want to do that very same thing.  Yet, I am here to tell you that we all need to adjust that attitude.

Paper Wasps tolerate quite a bit before they get aggressive.  And, there are things I could have done this year to prevent them from deciding the door of the high tunnel was a good place to make a home.  Unfortunately, the cap I put on this particular pipe had degraded over time and the opening presented itself to them.  So, there I was — having to decide what to do about it.

Many wasps are excellent beneficial predators.  In particular, Northern Paper Wasps are known to prey on various caterpillars that can make growing certain crops difficult if they are not controlled.

But, did you know that wasps are also beneficial pollinators in our landscape?

I didn’t, not until I noticed them on some goldenrod during a recent escape from the farm.  These wasps were clearly on the goldenrod for the goldenrod.  They were not hunting and they were very intent on the plant itself. 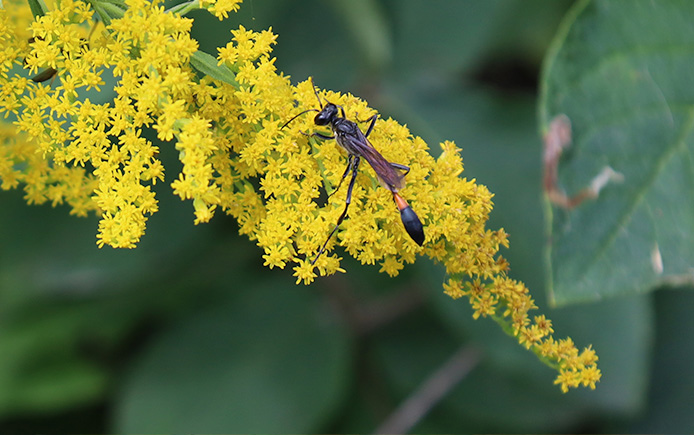 While we were observing, we also noticed some very thin wasps that we later found to be named Common Thread-waisted Wasps.  Thread-waisted wasps (there are several types) are solitary predators and their young are often parasitic.  A Common Thread-waisted Wasp will paralyze prey and bring it back so their larvae can feed until they mature. Adults will prey on smaller insects and they will also feed on pollen.  These wasps on the goldenrod could possibly have the opportunity to hunt AND take a drink of nectar!

Thread-waisted wasps have stingers, so if you decided you wanted to force it to do so, it could sting you.  Step on one with bare feet, you’ll get stung.  Try to hold one and prevent it from leaving, you could get stung.  But, otherwise, they aren’t interested in you and they don’t really see you as a threat (or food).  And that’s true for most wasps (believe it or not).

An excellent article by Hooks and Espindola, titled “Wasps, Surprisingly Cool Pollinators,” provides us with a quick introduction to what wasps do in our world.  According to the authors, there exist hundreds of thousands of wasp species.  Of them, nearly 850 species are social wasps, forming colonies or family units, like the Northern Paper Wasp.  Others are classified as solitary wasps.

“[W]asps are interested in flower blossoms mostly as a nectar source, and not as a source of proteins (from pollen). Nevertheless, some wasp species are able pollen vectors, and many play a crucial role as specialist pollinators. Some may be classified as excellent pollinators and in certain systems are much more efficient at pollination than their fuzzy-haired bee cousins.”

Wasps tend to favor white and yellow flowers with readily accessible nectar because they typically don’t have the mouth parts to reach the nectar in deeper flowers.  That certainly describes the goldenrod plant.  Some wasps have become specialized pollinators that are critical for the survival of certain wild plants.  In fact, some orchids mimic the scent and appearance of the female wasp of certain species, attracting the males — and thus promoting their own pollination as the male wasp visits multiple flowers. 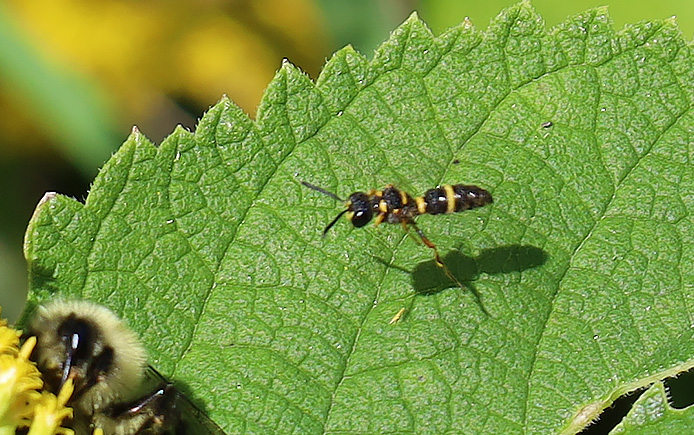 Not every wasp is a Yellowjacket

Most people will be exposed to the Yellowjacket simply because it is a generalist when it comes to diet.  To put it bluntly, it will eat many of the things we like to eat.  And Yellowjackets, another social insect, will aggressively protect their nests, making it more likely that humans will have a negative experience with them.

Even so, Yellowjackets can also be useful pollinators and predators.  But, there is a problem. I think it is safe to say that the vast majority of people are both unable and unwilling to differentiate between one wasp-like insect and another.  Most people think every wasp is a Yellowjacket.  In fact, some incorrectly identify them as bees, making it harder to encourage people to tolerate the presence of any pollinator that might have a stinger.

And, if you do a search on Yellowjackets, you will find the sites that appear first are all for pest control companies — most of which promote the use of insecticides to remove them.

I am, by no means, an expert myself.  But, here is a decent resource to see the difference between Yellowjacks, Paper Wasps and Bald-faced Hornets (all social wasps).  I am a bit conflicted by this particular article because, while it tries to remind us that these are all beneficial insects, much of it spends time on how to control them — which usually means death for the wasps.

Why?  Most people are scared of them.  And maybe it’s because the Yellowjacket hasn’t exactly taken on the role of the spokeswasp that it should?

Wasps are complex and interesting creatures

We have made bees — and especially honey bees — into media darlings when we want to encourage people to care about pollinators.  I am guessing that wasps don’t mind that so much because they don’t really want extra attention from humans.  But it is critical for us to understand that wasps are just as important in their own, special ways.  It doesn’t hurt that we are also learning that wasps are truly complex and interesting creatures.

Some recent research has shown us that Paper Wasps can actually recognize the face of other Paper Wasps, differentiating members of a social group (and those that might not fall within that group).  How cool is that?

Wasps currently have a bad rap sheet, but if everyone shares a bit more of the truth, perhaps they can gain more respect.  I know I’ll do a better job next year covering up those prospective nesting sites in the doorway of our high tunnel.  Then I won’t have to consider alternatives that aren’t the best for my farm, and certainly aren’t the best for the wasps.