Will California save the bees? - Honey Bee Haven
15012
post-template-default,single,single-post,postid-15012,single-format-standard,bridge-core-2.6.8,qode-page-transition-enabled,ajax_fade,page_not_loaded,,qode-theme-ver-25.3,qode-theme-bridge,qode_header_in_grid,wpb-js-composer js-comp-ver-6.6.0,vc_responsive,elementor-default,elementor-kit-15593

Will California save the bees? 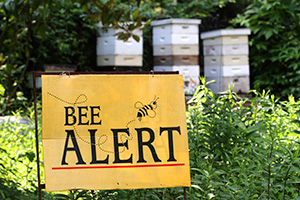 24 Oct Will California save the bees?

Last week I sat through a long hearing in the California legislature, all about bee declines. By the end, I was both excited and frustrated. As I noted in my closing comments at the hearing, California can and must take action to address the dramatic declines.

This is an important opportunity for the state to be a driver of good public policy nationally. And addressing the issue here in California will be good for our business — the benefits of bees to our agricultural economy are tremendous. While it was encouraging to see legislators taking the issue up at the hearing, it was frustrating to see the room filled with pesticide corporations and their allies trying to confuse the discussion and delay action.

California is a already a driver of what happens nationally on bees, just from the reality of how beekeeping works. Many beekeepers pollinate almonds in California, then move on to pollinate other crops — from apples to pumpkins and blueberries — across the country.

So fewer bees in California means fewer bees for the entire food and farming system.

Bret Adee, a commercial beekeeper who has been pollinating California almonds for over 23 years explained this to legislators last Wednesday:

There’s a great nervousness in the whole industry … The way to have bees for California is that they have to leave California healthier than they came in. Nationwide, we are at the edge of not being able to restock our bees. Beekeeper after beekeeper I’ve talked to this year has less bees than last year, no matter all his efforts to restock.

Legislators didn't seem to be getting the message, though it wasn’t for lack of trying. As Assemblymembers Susan Eggman, Luis Alejo and Mariko Yamada probed, the state officials at the hearing failed to share meaningful information.

“There isn’t a safe place for bees to be in California without exposure to pesticides,” Susan Kegley, PhD, CEO of Pesticide Research Institute and a consulting scientist for PAN told the legislators.

What seemed remarkable to me from state officials who testified was the lack of urgency and any clear plan of action on pesticides, especially given the scientific evidence on neonicotinoids. Just as Europe has done, California has an opportunity to immediately take steps to protect bees. Yet officials seem to be skirting the issue, passing the buck to an intransigent EPA.

Pesticide industry lobbyists and allies tried to divert attention to issues like the pesky Varroa mite and the lack of food or forage for bees. As I’ve mentioned before, it’s a common industry tactic to redirect attention away from pesticides to issues that face less opposition. In doing so, they further confuse the problem and limit opportunities for action.

The confusion is largely driven by industrial agriculture lobbyists like Kahn, Soares and Conway (you might remember them from methyl iodide) and AMVAC, a pesticide company known for buying patents for some of the most hazardous pesticides.

Mites and large monocultures — lacking food — have indeed created stress on bees. “We had mites in the country for over 15 years, maybe 16 or 17 years, before we had abnormal failures in the winter time,” Adee explained to legislators at the hearing.

No doubt we can and should find all manner of ways to strengthen the resilience of bees, and we can’t ignore some of the most clear and effective ways to do that. And controls on bee-harming pesticides is the place to start.

What California can do

California has a long tradition of driving pesticide policy reforms — and the need and the opportunity are clear.

In a letter penned by PAN, beekeepers from Santa Barbara and San Diego, as well partner groups like Beyond Pesticides and Center for Food Safety, we urged state officials to take three steps:

Take action» Send a message to California leaders that they should step up to protect bees, for beekeepers, our food system and the state’s economy.

This blog was originally posted on GroundTruth and written by Paul Towers.