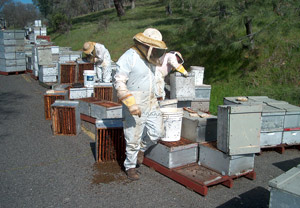 Posted at 00:02h in Uncategorized by community@panna.org
0 Likes

Scientific evidence continues to mount strengthening the case that neonicotinoid pesticides are indeed key drivers behind colony collapse disorder (CCD). Three new studies out in the past two weeks, including one today, add to the growing body of evidence that implicate pesticides as a critical catalyst behind drastic declines in bee population.

With beekeepers continuing to lose more than one-third of their hives each year, on average, the research is timely. Yet pesticide manufacturers like Bayer are attacking the science and attempting to delay regulatory action.

Still, even with the industry PR machine at full throttle, public pressure is on for state and federal regulators to take swift action. “The weight of the evidence is tipping for neonicotinoids as a critical factor in colony collapse disorder,” said Heather Pilatic, co-director of Pesticide Action Network. “While pesticides are not the only problem for honey bees, we know enough to act.”

The evidence is damning

The new studies come on the heels of a year of damning evidence for these pesticides. Three separate studies in the last year confirmed that low-level exposures to neonicotinoids synergize with a common pathogen to dramatically increase bees’ susceptibility to infection and the likelihood of death.

In one long-awaited study published in January, exposure levels were so low as to be undetectable. Italian researchers have proven, again, that in a single flight over freshly-sown corn fields, bees can be exposed to neonicotinoid-contaminated dust from planters depositing treated seeds at acutely toxic levels. These same researchers have shown in 2010 and 2011 that sub-lethal exposures impair bees’ learning and memory.

Three new studies come on the heals of a year of damning evidence for these pesticides.

In the Harvard study released today from the forthcoming issue of the Bulletin of Insectology, researchers found that 94% of the hives died after exposure to one neonicotinoid called imidacloprid. The study team exposed bees to the pesticide via high fructose corn syrup at levels “determined to reflect imidacloprid residue levels reported in the environment previously.”

Bees can be exposed in two ways: through nectar from plants or through high-fructose corn syrup beekeepers use to feed their bees. (Since most U.S.-grown corn has been treated with imidacloprid since 2005, it’s also found in corn syrup.)

As the scientific case grows stronger, momentum continues to build for regulators to do something to protect bees. People across the country, including beekeepers, continue to call on EPA to take decisive action. And with emerging science strengthening the case that neonicotinoids play a key role in CCD, the call for action is getting louder.

EPA is currently reviewing clothianidin, but the Agency doesn’t expect that process to wrap up until 2018. The bees can’t wait.

Take action » If we stay focused, and keep the public conversation on track, this could become a tipping moment in the fight to protect pollinators from pesticides. Send a letter to your local newspaper and make sure EPA, and others poised to decide the fate of bees, know what’s at stake.