Your (not so) “bee-friendly” plants - Honey Bee Haven
15045
post-template-default,single,single-post,postid-15045,single-format-standard,bridge-core-2.6.8,qode-page-transition-enabled,ajax_fade,page_not_loaded,,qode-theme-ver-25.3,qode-theme-bridge,qode_header_in_grid,wpb-js-composer js-comp-ver-6.6.0,vc_responsive,elementor-default,elementor-kit-15593

Your (not so) “bee-friendly” plants 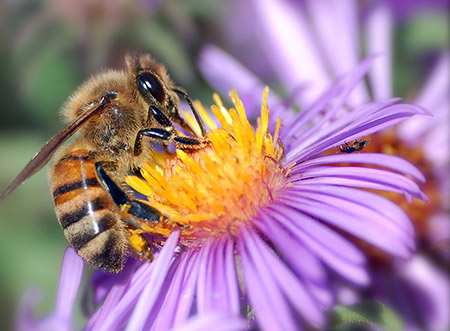 Bee-harming pesticides in our lavender and daisies? In the same week that an international body of scientists released a comprehensive global assessment of the harms of pesticides to bees, a new report shows that these very same pesticides are found in many of our backyard plants — at levels of concern — that are meant to support pollinators.

The report shows that 51% of garden plant samples purchased at top garden retailers (Home Depot, Lowe’s and Walmart) in 18 cities in the United States and Canada contain neonicotinoid (neonic) pesticides — a key driver of declining bee populations. Concerning levels of the pesticides were found in places like California’s San Francisco Bay Area and in Minnesota’s Twin Cities. In some cases, multiple neonics were found in the same plant, in the leaves, stalks or flowers.

Last year, we conducted a smaller version of the research project with Pesticide Research Institute and Friends of the Earth. And the good news is that some retailers are taking notice, including some home and garden stores like Bachman’s and BJ’s Wholesale Club, as well as grocers pledging to remove the pesticides from their shelves and supply chains.

The big players — Home Depot, Lowe’s and Walmart — have a lot more work to do as they shift industrial nursery growing practices to green, cutting-edge alternatives.

Neonics are a relatively new class of systemic pesticides that can be applied as seed coatings, as granules or sprayed on plants; they’re taken up through the plant’s vascular system and expressed in pollen and nectar. Even at sublethal doses they’re toxic to bees and other pollinators.

But the science is clear: pesticides, particularly neonics, are playing a key role in bee declines.

That’s the case for most of the levels found in nursery plants; they might not kill bees outright but they are increasingly linked to reproductive impairment, immune suppression, homing failure and impaired foraging — all factors that compound the other stressors bees face and contribute to their decline.

However, none of this is true if you ask neonic manufacturers like Bayer and Syngenta. They continue to spin and confuse the issue, downplaying the role their products play by obfuscating the science around pesticides and pollinators and attempting to re-focus public conversation on other bee stressors like mites. But the science is clear: pesticides, particularly neonics, are playing a key role in bee declines.

Earlier this week, 29 independent scientists released the four-years-in the-making “Worldwide Integrated Assessment” on the impacts of neonics after reviewing hundreds of scientific papers. The report documents significant harms to honey bees and other pollinators, as well as entire ecosystems that serve as the underpinnings of our food system.

One of the report’s lead authors summarized the situation as:

“Far from protecting food production the use of neonics is threatening the very infrastructure which enables it, imperiling the pollinators, habitat engineer and natural pest controllers at the heart of a functioning ecosystem.”

Among the findings of the report:

My colleague and PAN’s staff scientist, Emily Marquez, PhD, says the findings should galvanize regulators in states and at the federal level:

“This report should be a final wake-up call for American regulators who have been slow to respond to the science. The weight of the evidence showing harm to bees and other pollinators should move EPA to restrict neonicotinoids sooner than later. And the same regulatory loopholes that allowed these pesticides to be brought to the market in the first place — and remain on the shelf — need to be closed.”

While President Obama announced the creation of a new federal task force to address bee declines last week, EPA and other federal agencies don’t have a good track record on the issues. Filling the void, states and local governments have been stepping up. My community — Sacramento — has used the opportunity to call for the city to become a pesticide-free “Honey Bee Haven.” In a release today, the vice mayor even said protecting bees is essential to keep the city “prosperous.”

This follows similar actions by Eugene, OR earlier this year and Spokane, WA earlier this week to phase out bee-harming pesticides and prioritize bee health. And one neighborhood in Boulder, CO declared itself “bee-safe” earlier this month.

Bayer, Syngenta, Monsanto and other pesticide corporations have caught wind of these efforts and are continuing with aggressive public relations efforts. But no number of Bayer coloring books can color over the power of communities in action.

Learn more » Want to make your backyard or community a Honey Bee Haven? Visit www.honeybeehaven.org for tips and tools — and to take the pledge to protect pollinators.

This blog was written by Paul Towers, PAN’s Organizing & Media Director, and was originally posted on GroundTruth.