Bee-harming pesticides are bad news for birds, too 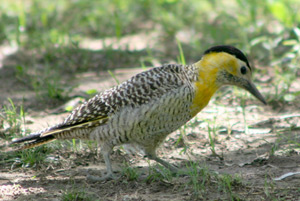 20 Mar Bee-harming pesticides are bad news for birds, too

Turns out, the pesticides that harm bees are also harming birds. According to a report out this week, the class of widely used, systemic insecticides that science shows are a key factor in dramatic bee die-offs are also contributing to falling bird populations.

At a congressional briefing yesterday, an expert panel highlighted the damage that neonicotinoid pesticides — or “neonics” — inflict on bees, birds and the agricultural economy. Beekeepers, scientists and public interest organizations called on elected officials to take action, and soon.

Commercial beekeepers have reported that their industry is on the verge of collapse, with many expecting this year to bring the worst bee losses yet (40% or more). Farmers who rely on pollination services are also increasingly concerned.

So are bird conservationists and others. According to report co-author Cynthia Palmer of the American Bird Conservancy: “It is clear that these chemicals have the potential to affect entire food chains.”

As we recently reported, bird populations — particularly prairie birds — are in steep decline, with populations in Midwestern states most effected. While habitat loss and other factors contribute, pesticides of all types are increasingly recognized as a key factor.

The trouble with neonics

This week’s report highlights the impact of neonics specifically, concluding that they are “lethal to birds as well as the aquatic systems on which they depend.” Neonicotinoids are used as seed treatments in hundreds of crops, from corn to almonds. They are also found in lawn care and flea products. And even small doses can have strong repercussions, say report authors.

A single corn kernel coated with a neonicotinoid can kill a songbird. Even a tiny grain of wheat or canola treated with the oldest neonicotinoid, imidacloprid, can poison a bird. As little as 1/10 th of a corn seed per day during egg-laying season is all that is needed to affect reproduction with any of the neonicotinoids registered to date.

While bees are more routinely exposed to neonics taken up by the plant and expressed as pollen, nectar and guttation “dew” droplets, birds tend to ingest neonic-treated seeds directly.

In short, with use so widespread and decisionmakers so slow to act, both bees and birds are facing serious trouble. According to this week’s report, which reviews more than 200 studies on neonicotinoids — including industry research obtained through the U.S. Freedom of Information Act — the time to take action is now:

We have a small window of opportunity in which to act; EPA’s next review of this class of pesticides will not occur for at least 15 years, and the damage done in those intervening years will be irreversible.

EPA is currently reviewing neonicotinoids in a process that is expected to conclude in 2018.  This includes consideration of the controversial insecticide clothianidin that came to market through a fast track “conditional registration” process that sidesteps careful scientific review.

Despite millions of citizen petition signatures and a legal petition filed last year, the agency has repeatedly declined requests to act more quickly. But with this week’s report highlighting harm to birds joining the existing evidence linking neonics with bee losses, the case for urgent action is even stronger.

And maybe all this public pressure is having a little impact. As reported in USA Today, Jim Jones — acting Assistant Administrator at EPA — said the agency “has accelerated the comprehensive re-evaluation of these pesticides in the registration review program due to stakeholder concern about the environmental impacts of neonicotinoid pesticides.” Stay tuned for more details as they emerge.

Meanwhile, yesterday’s briefing on Capitol Hill signals increased pressure on elected officials to get in the ring. Congress has the authority to exercise oversight over federal agencies like EPA. They can call a hearing, and they alone can fix a broken pesticide law that leaves EPA hamstrung and captive to industry influence.

The birds and the bees can’t wait any longer. They need help now.

Take action» Bees are still dying, and pesticides are a key culprit. As new evidence shows bee-toxic insecticides are also harming birds, it’s even more important for Congress to step up.