Bees need help now! Time to up the ante. 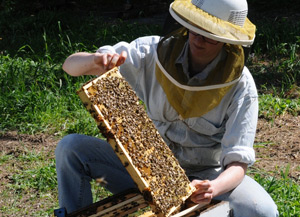 21 Mar Bees need help now! Time to up the ante.

With other options exhausted over the past two years, beekeepers and partner organizations are now suing EPA to protect pollinators. We’ve filed over a million signatures from concerned individuals, a legal petition and a notice of intent to sue. And all to little avail. Now we’re upping the ante.

There’s too much at stake for EPA to stay stuck. Bees are in trouble, and they’re vital to our food system and our agricultural economy. They’re responsible for pollinating one in three bites of food we eat, including 95 types of fruits and nuts in North America. And commercial beekeepers report that their industry is on the verge of collapse.

“America’s beekeepers cannot survive for long with the toxic environment EPA has supported. Bee-toxic pesticides in dozens of widely used products, on top of many other stresses our industry faces, are killing our bees and threatening our livelihoods. Our country depends on bees for crop pollination and honey production. It’s time for EPA to recognize the value of bees to our food system and agricultural economy.”

Earlier this year, I shared the early warnings from beekeepers across the country that there wouldn’t be enough bees for the 800,000 acres of California almonds. And these predictions came true. Bee losses are so dramatic this year, there simply aren’t enough pollinators.

The losses Steve Ellis experienced were unfortunately the norm, rather than the exception. Last February, Steve had 1,492 honeybee colonies. By February of this year, he had 1,032. And of those remaining colonies, only 680 were healthy enough to rent to almond growers. Steve lost 45% of his bees in one year alone.

Coming off a tough season, Tom Frantz — a conventional almond grower from Shafter, California — shared his perspective with me earlier this week:

“The almond industry is in trouble unless EPA takes action to protect bees. We are reliant on bees for pollination – and strong prices have buoyed our success. If bee declines continue, problems loom large for almond growers and rural economies.”

What EPA got wrong

A year ago today, beekeepers and partner organizations — including PAN — filed a legal petition with EPA, urging the agency to consider bee-toxic clothianidin an “imminent hazard.” The legal petition argued that the agency should act with greater urgency and speed to protect pollinators from exposure. EPA ignored those concerns, and the strong science supporting them. Agency officials still intend to conclude review of these pesticides in 2018 and meanwhile allow use of the bee-harming neonicotinoid pesticides that are currently on the market to continue. “Neonics” are now the most widely used class of insecticide in the world.

More and more independent scientific evidence has come to light linking pesticides and bee die-offs. While these chemicals are not the only factor, neonics are a critical contributor to the significant annual losses of bees — a problem EPA can and must control.

The lawsuit we’re filing today calls on EPA to immediately suspend the use of two specific neonicotinoids (clothianidin and thiamethoxam), found in dozens of products now on the market. The lawsuit — filed by the Center Food Safety on behalf of four commercial beekeepers, PAN, Beyond Pesticides and other groups — challenges the use of neonicotinoids on these counts:

The road ahead for bees and beekeepers looks bleak unless and until EPA takes decisive action. Let’s hope this lawsuit serves as a wakeup call.