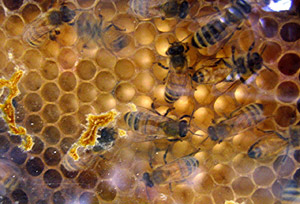 Posted at 21:29h in Uncategorized by community@panna.org
0 Likes

Today, PAN joined beekeepers and partners Beyond Pesticides and Center for Food Safety in filing a legal petition that calls on EPA to suspend registration of Bayer’s controversial bee-toxic pesticide, clothianidin.

We also delivered over a million signatures from individuals around the world — including over 20,000 PAN supporters — calling on EPA to take decisive action to protect honey bees from neonicotinoid pesticides before it is too late.

Bees and other pollinators continue to die off at catastrophic rates; according to the U.S. Department of Agriculture (USDA), commercial beekeepers lost an average of 36% of their hives last year.

As an indicator species, honey bees serve as sentinels we ignore at our own peril. They are also responsible for pollinating one in every three bites of food we eat. We rely on them, and they’re relying on us. With today’s petition, we’re redoubling our efforts to protect these vital pollinators.

In December 2010, we publicized a leaked memo showing that clothianidin was allowed to remain on the market despite the lack of any scientifically valid study to support its registration. EPA has, in the intervening year, failed to respond in a meaningful way.

Today’s legal petition follows up on the leaked memo and EPA’s failure to act by outlining three ways in ways in which clothianidin is on the market illegally:

These legal failures are made all the more urgent by the fact that bees and other pollinators are continuing to die off at catastrophic rates, while the commercial beekeeping industry on which agriculture relies is itself on the brink of collapse. Over two dozen commercial beekeepers from around the country signed on to the legal petition, one of whom experienced colony losses so substantial last year that he says he qualified for USDA disaster relief funds. 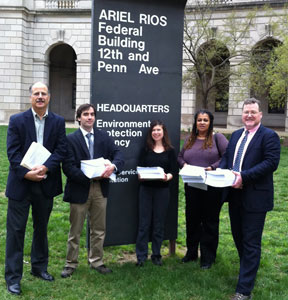 State of the Science

As the public debate over the causes of Colony Collapse Disorder (CCD) — a syndrome in which bees seemingly abandon their hives — carries on in the media, more and more new science has shown that pesticides are indeed a critical piece of the puzzle. This, notwithstanding the periodic press announcements that one or another smoking gun virus or parasite has been found to be behind CCD.

Three separate studies in the last six months have confirmed that sublethal doses of pesticides act synergistically with a common gut fungus, Nosema, to make bees sick. Another three studies confirm that bees are exposed to acutely toxic levels of clothianidin in the field through the poisonous dust, or planter exhaust, as treated corn seeds go into the ground.

Neonicotinoid pesticides such as clothianidin and imidacloprid remain prime suspects along with pathogens and malnutrition. Scientists now believe that CCD is caused by no single culprit, but is instead the result of these multiple stressors acting in various combinations to weaken hives to the point of collapse. Other pesticides to which bees are commonly exposed (e.g. fungicides, pyrethroids, miticides and fipronil) have come under scrutiny as well, often in combination with other stressors. Certain fungicides, for instance, have been found to synergize with neonicotinoids increasing the latter’s toxicity by over a 1,000-fold.

As supporting material to the legal petition, PAN submitted a collection of current studies outlining the “state of the science” (PDF) on bees and pesticides. We’ll release this report publicly in coming weeks. In the meanwhile, however, we find that the weight of the evidence is such that we know enough to act. Neonicotinoids like clothianidin are not the sole cause of CCD, but they are making our bees sick, and at least one of them is on the market illegally.

Take Action » We will continue to pressure EPA to take action on clothianidin, and expect our petition to initiate a public process in which we’ll engage PAN supporters. In the meanwhile, we need pressure on all fronts. Join us in telling Congress, “We know enough. EPA is broken. It’s time for you to get in the ring.”