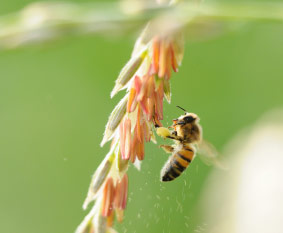 Posted at 20:19h in Uncategorized by Heather Pilatic
0 Likes

No farmer in his or her right mind wants to poison pollinators. When I spoke with one Iowa corn farmer in January and told him about the upcoming release of a Purdue study confirming corn as a major neonicotinoid exposure route for bees, his face dropped with worn exasperation. He looked down for a moment, sighed and said, “You know, I held out for years on buying them GE seeds, but now I can’t get conventional seeds anymore. They just don’t carry ‘em.”

This leaves us with two questions: 1) What do GE seeds have to do with neonicotinoids and bees? and 2) How can an Iowa corn farmer find himself feeling unable to farm without poisoning pollinators? In other words, where did U.S. corn cultivation go wrong?

The short answer to both questions starts with a slow motion train wreck that began in the mid-1990s: corn integrated pest management (IPM) fell apart at the seams. Rather, it was intentionally unraveled by Bayer and Monsanto.

Honey bees caught in the cross-fire

Corn is far from the only crop treated by neonicotinoids, but it is the largest use of arable land in North America, and honey bees rely on corn as a major protein source. At least 94% of the 92 million acres of corn planted across the U.S. this year will have been treated with either clothianidin or thiamethoxam (another neonicotinoid).

As we head into peak corn planting season throughout the U.S. Midwest, bees will once again “get it from all sides” as they:

Over the last 15 years, U.S. corn cultivation has gone from a crop requiring little-to-no insecticides and negligible amounts of fungicides, to a crop where the average acre is grown from seeds treated or genetically engineered to express three different insecticides (as well as a fungicide or two) before being sprayed prophylactically with RoundUp (an herbicide) and a new class of fungicides that farmers didn’t know they “needed” before the mid-2000s.

A series of marketing ploys by the pesticide industry undergird this story. It’s about time to start telling it, if for no other reason than to give lie to the oft-repeated notion that there is no alternative to farming corn in a way that poisons pollinators. We were once — not so long ago — on a very different path.

How corn farming went off the rails 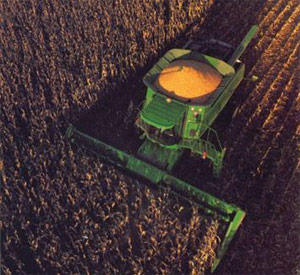 In the early 1990s, we were really good at growing corn using bio-intensive integrated pest management (bio-IPM). In practice, that meant crop rotations, supporting natural predators, using biocontrol agents like ladybugs and as a last resort, using chemical controls only after pests had been scouted for and found. During this time of peak bio-IPM adoption, today’s common practice of blanketing corn acreage with “insurance” applications of various pesticides without having established the need to do so would have been unthinkable. It’s expensive to use inputs you don’t need, and was once the mark of bad farming.

Then, in the mid-to-late 1990s, GE corn and neonicotinoid (imidacloprid) seed treatments both entered the market — the two go hand-in-hand, partly by design and partly by accident. Conditions for the marketing of both products were ripe due to a combination of factors:

Then, as if on cue, Monsanto introduced three different strains of patented, GE corn between 1997 and 2003 (RoundUp Ready, and two Bt–expressing variants aimed at controlling the European Corn Borer and corn root worm). Clothianidin entered the U.S. market under conditional registration in 2003, and in 2004 corn seed companies began marketing seeds treated with a 5X level of neonicotinoids (1.25 mg/seed vs. .25).

… and in the space of a decade, U.S. corn acreage undergoes a ten-fold increase in average insecticide use. By 2007, the average acre of corn has more than three systemic insecticides — both Bt traits and a neonicotinoid. Compare this to the early 1990s, when only an estimated 30-35% of all corn acreage were treated with insecticides at all.

Adding fuel to the fire, in 2008 USDA’s Federal Crop Insurance Board of Directors approved reductions in crop insurance premiums for producers who plant certain Bt corn hybrids. By 2009, 40% of corn farmers interviewed said they did not have access to elite (high-yielding) non-Bt corn seed. It is by now common knowledge that conventional corn farmers have a very hard time finding seed that is not genetically engineered and treated with neonicotinoids.

In 2007, what’s left of corn IPM was further unraveled with the mass marketing of a new class of fungicides (strobilurins) for use on corn as yield “boosters.” Before this, fungicide use on corn was so uncommon that it didn’t appear in Crop Life’s 2002 National Pesticide Use Database. But in the last five years, the pesticide industry has aggressively and successfully marketed prophylactic applications of fungicides on corn as yield and growth enhancers, and use has grown dramatically as a result. This despite the fact that these fungicides work as marketed less than half the time. According to this meta-analysis of efficacy studies, only “48% of treatments resulted in a yield response greater than the economic break-even value of 6 bu/acre.”

Back to the bees. Neonicotinoids are known to synergize with certain fungicides to increase the toxicity of the former to honey bees up to  1,000-fold, and fungicides may be key culprits in undermining beneficial bee microbiota that do things like make beebread nutritious and support immune response against gut pathogens like Nosema. Fungicide use in corn is likewise destroying beneficial fungi in many cropping systems, and driving the emergence of resistant strains.

As with insecticides and herbicides, so too with fungicide use on corn: corn farmers are stuck on a pesticide treadmill on high gear, with a pre-emptively pressed turbo charge button (as “insurance”). Among the many casualties are our honey bees who rely on corn’s abundant pollen supply.

Keeping us all tethered to the pesticide treadmill is expected behavior from the likes of Monsanto. But what boggles the mind is that all of this is being aided and abetted by a USDA that ties cheap crop insurance to planting patented Bt corn, and a Congress that refuses to tie subsidized crop insurance in the Farm Bill to common-sense conservation practices like bio-intensive IPM. Try explaining that with a waggle dance.