The dangers of treated seeds, realized 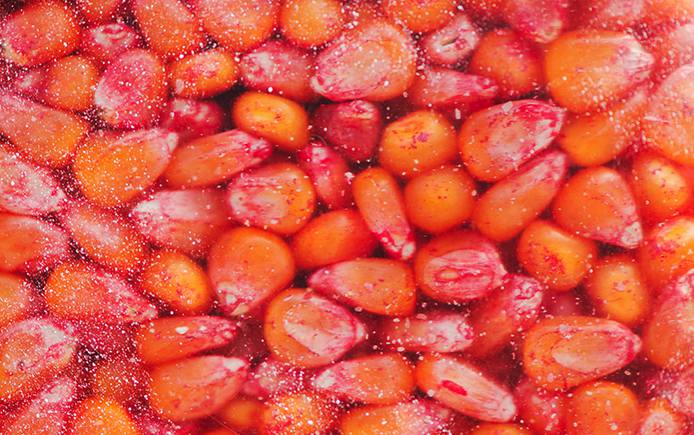 Posted at 17:55h in Uncategorized by community@panna.org
0 Likes

Early this year, the Guardian reported that residents of Mead, Nebraska — a tiny town of 600 near Omaha — were getting sick, and also noticing livestock and bee fatalities. The cause? All signs point to AltEn, a neighboring ethanol plant found to be processing thousands of pounds of unused pesticide-treated corn seed from all across the country.

Not your typical ethanol plant

Residents say they had no idea that treated seeds would be processed in the factory when the city approved the new plant in 2018 — they assumed AltEn would be using untreated field corn. As it turns out, the ethanol plant became one of just two in the country to process seeds coated with pesticides, after entering into long-term contracts with multinational seed companies like Bayer, Syngenta, and Dow. By 2020, AltEn was processing 98% of the treated seed discard in the U.S. — 600,000–900,000 pounds daily.

In 2019, state environmental officials recorded levels of neonicotinoids — a common seed treatment known to be harmful to pollinators — in one of the large hills of waste on the property. Regulatory benchmarks suggest that anything over 70 parts per billion (ppb) is unsafe; researchers found levels at a shocking 427,000 ppb.

Over the last three years of the plant’s operation, Mead residents — some who live less than a mile from the factory — began to report all kinds of health problems like sudden nosebleeds, passing out while out on a jog, and constant coughing. Since 2018, over 50 community members have made formal complaints around these concerns, as well as livestock health concerns, fatalities, and “bee kills” (sudden colony collapse). For a community of less than 600, 50 complaints is extremely high.

Early this year, state regulators finally ordered the plant to shut down until it can dispose of its piles of waste, which AltEn had originally sold back to farmers as a soil conditioner before receiving a “Stop Sale” order from the state. The plant had until March 1 to remove its waste — but AltEn chose to ignore those orders. To make matters worse, in late February, a frozen pipe burst on a four-million-gallon tank in the now-shut facility, which resulted in a spill that traveled more than four miles from the plant.

Now, the State of Nebraska is suing AltEn for failing to clean up its mess. Yet residents who have watched neighboring industries go out of business before, are worried the plant will go bankrupt and the waste will never be cleaned up.

With Mead’s disaster all over the regional and national news, Nebraska legislators have also stepped up to take action, advancing a bill to limit the use of treated seeds in ethanol plants within the state. So far, this legislation has moved forward unencumbered through Nebraska’s unicameral legislature. While it’s a good sign for the residents of Mead, the absence of corporate opposition is almost unsettling. If and when Nebraska successfully casts out the use of treated seeds in ethanol production, we could easily be facing a national game of whack-a-mole, with pressure on other states to process these seeds instead.

Though the scale of this disaster is appalling, it’s hard to feel surprised. Mead’s disastrous situation is completely tied to our broken regulatory system — one that has been shielding pesticide seed treatments from the public eye and precautious regulatory measures for far too long.

Pesticide-treated seeds account for the most common application of neonicotinoid (neonic) pesticides, the fastest-growing class of insecticides worldwide. Acutely toxic to pollinators and other invertebrates, researchers are also finding that neonics pose large risks to birds and large mammals — including humans. During planting and after, treated seeds are prone to drift (“dust off”) and leach into waterways and onto neighboring crops. And due to their widespread use, scientists worry about pest resistance, something we’re facing with other broadly used pesticides like glyphosate.

How widespread are we talking? About two thirds of soybean seed and over 90% of corn seed in the U.S. are pre-treated with neonics before they are sold. With natural fluctuations in how many acres of each crop are grown yearly, it comes as no surprise that ethanol plants like AltEn have arisen as a convenient final destination for unused treated seeds each year — despite the dangers to surrounding communities.

If pre-treating seeds regardless of market demand sounds needlessly wasteful, wait until you see the research around seed treatment efficacy. Researchers find that regionally and across North America, neonic seed treatments do not consistently increase yield or profits for farmers — the data suggests that for a majority of farmers, the cost of seed treatment is not recouped. Yet without access to supplies of untreated seeds, many farmers don’t have a choice whether or not to use these pesticides.

When we look at places to begin reducing pesticide use in conventional farming, seed treatments seem like the perfect place to start. Yet there’s one tiny problem: seed treatments aren’t regulated, tracked, or researched like other pesticides. Due to a giant regulatory loophole, planting a pesticide-coated seed is not considered a pesticide application.

Instead, seed treatments have been categorized as “treated articles,” which means that, officially, the site of “pesticide application” is considered to happen in the factory or coop where the seed was first coated — not on the farm. (Other products in the “treated article” category include things like house paint treated to keep insects away from a freshly painted surface.) Including treated seeds in this category leaves researchers without access to data about millions of the pounds of pesticides that are applied to the landscape each year — and leaves regulators without the power to address this usage. It’s clear that categorizing seed treatments in this way only serves one entity: pesticide industry profits.

Just the tip of the iceberg

For residents of Mead, we can only hope that AltEn’s toxic waste will be cleaned up and community members will see those responsible for their exposure taken to task. Already, state officials are shirking this responsibility — a long-anticipated community meeting for March 1 was cancelled after state officials refused to attend. Yet it’s clear Mead residents won’t let this issue be brushed under the rug. As this story continues to unfold, it exposes a bigger problem: AltEn’s disaster isn’t an anomaly, it’s the natural product of a system that’s broken from start to finish. And just as community members have stepped up to hold Nebraska decisionmakers accountable, we must all step up to demand that the treated seed loophole be closed — at the very least, these dangerous pesticides must be accounted for at every step of production. If we don’t act now, we may be facing a series of fires that we can’t put out.

Mead shows us that change starts on the local level — and there may already be advocates in your state working to reduce neonic use. I encourage you to get involved with these campaigns today and build the movement for effective regulation that puts people over profit.