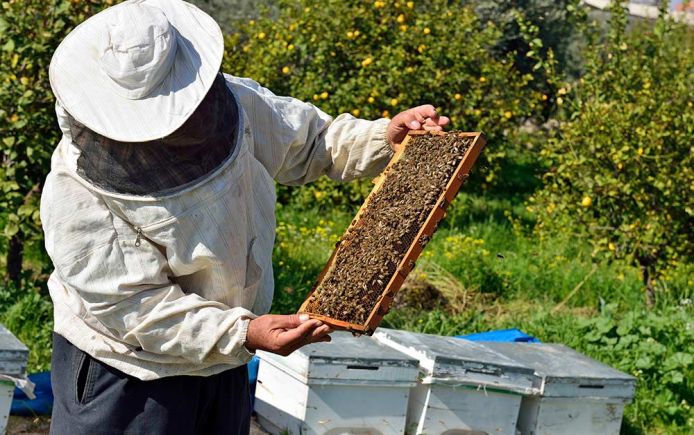 Posted at 19:12h in Uncategorized by community@panna.org
0 Likes
Earlier this week, a top researcher for the U.S. Department of Agriculture (USDA) filed a complaint alleging that the agency retaliated against him for his research on bee-harming neonicotinoid pesticides — and for blowing the whistle on USDA interference with his research.

Dr. Jonathan Lundgren has worked at USDA's Agricultural Research Service lab in Brookings, South Dakota for 11 years. His peer-reviewed research on neonicotinoids (neonics), and their impact on pollinators, has been widely published and has received accolades from his contemporaries.

USDA, however, appears to be less pleased. The claim that Lundgren filed against USDA highlights examples of unusual agency behavior that slowed down his research and made it difficult for Lundgren and others in his lab to do their jobs.

When it comes to pollinators and pesticides, the stakes are high. Bees pollinate roughly one in three bites of food we eat, and they've been dying off at alarming rates for almost a decade — with independent studies pointing to neonics and other pesticides as a key factor in this trend. Still, corporations like Bayer and Syngenta routinely claim their lucrative neonic products are pollinator-safe. And these corporations have been known to heavily lobby decisionmakers.

This is a sticky situation for USDA. The agency is at the helm of the federal task force (along with EPA) charged with protecting honey bees and other pollinators. In this and all situations, USDA's scientific integrity is critical.

In 2004, Dr. Lundgren was hired as a research scientist by USDA. As an entomologist, his research often looked at neonicotinoids and their impacts on beneficial insects, including pollinators like honey bees as well as important predatory insects that help keep pests in check.

His findings have provided important information on the benefits of biodiversity in farm ecosystems, and he’s looked closely at whether or not neonicotionid seed coatings provide real benefits in yield or profit for farmers. Lundgren’s research is independent and peer-reviewed — and in some cases, his conclusions haven't matched up with the interests of the pesticide industry.

In March 2014, Lundgren served as a reviewer for a Center for Food Safety report on the lack of yield benefits associated with neonicotinoid seed coatings. In the same month, he gave an interview about his research on emerging RNAi biotechnology, and the Minneapolis Star Tribune published an article featuring his research on neonicotinoids.

Soon after, Lundgren's employer strongly discouraged future contact with the media, even though his interviews had not broken any agency protocol. In his complaint against USDA, Lundgren also reported that he and other researchers in his lab began facing disproportionate hurdles from USDA higher-ups in routine processes like travel approval and grant submissions.

Dr. Lundgren filed a scientific integrity complaint in September 2014, describing these interferences with his research and the day-to-day operations of his laboratory and travel.

In August 2015, less than a year after his scientific integrity complaint against the Agency, Lundgren was disciplined with a 14-day suspension. The justification for the suspension? Two distinct events, neither out of the ordinary according to norms at USDA — minor issues with travel paperwork and with an article submission to a journal.

This week’s whistleblower complaint, filed by Public Employees for Environmental Responsibility on Lundgren’s behalf, provides evidence that disciplinary action taken against him was in retaliation of his scientific integrity complaint.

Not the first time

The news on Lundgren’s case just broke yesterday, and those of us outside the agency can’t know exactly what happened behind closed doors. But unfortunately, recent USDA history gives us reason to be concerned.

In July 2014, Dr. Jeffrey Pettis — formerly the lead scientist at the USDA’s bee research lab in Beltsville, Maryland — was demoted from his position. Leading U.S. beekeeping organizations were vocal in their concern over Pettis’s removal, as he had established himself as a strong advocate for beekeepers and “advanced research on honey bees like few others in the world can claim.” Pettis himself expressed that he had “strong reservations” about the change in leadership, but chose not to publicly challenge the changing of the guard.

And Pettis and Lundgren aren’t alone. This spring, ten USDA scientists spoke up, filing a petition calling on USDA to clean up its track record of ordering researchers to “retract studies, water down findings, remove their name from authorship and endure long indefinite delays in approving publication of papers that may be controversial.”

We need public eyes on USDA — and on all public agencies responsible for making critical regulatory decisions about pesticides, genetically engineered crops, and our food and farming system. Rigorous, independent science is the bedrock beneath sound regulatory decisions. Red flags about intimidation and harassment of USDA scientists should cause concern for all of us. It’s time for the agency to clean up its act.